Westport Innovations (NASDAQ: WPRT) could be on the verge of a massive rally.

Natural gas has substituted for coal in many processes – such as electricity generation and steel production – during the past few years. But the natural gas story is far from finished. And this could give WPRT a big boost.

Many energy experts believe natural gas will also replace oil in the not-so-distant future. This change won’t happen overnight and it’s unlikely to replace oil completely. However, the transition is already quietly beginning.

Trucking was one of the first industries to move from oil to natural gas. By converting to natural gas engines, truckers can save money on fuel costs. Also, natural gas (liquefied) is denser than diesel. So natural gas-powered trucks get more miles per tank. In fact, many of these trucks can travel more than 800 miles without refueling.

Westport develops fuel systems that allow trucks to burn natural gas as opposed to diesel. Through joint ventures with such companies as Ford, Cummins and Weichai Power, the company has expanded its product line and global footprint. 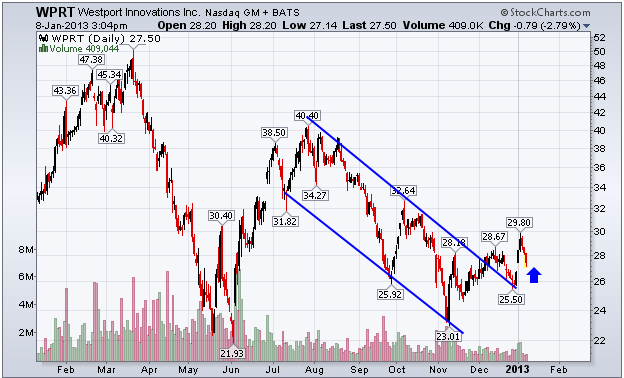 This chart shows the price of WPRT shares along with an important support level to monitor.

The company has a way to go before it’s profitable. Also, fuel station infrastructure needs to expand before widespread adoption of natural gas can occur. However, the stock is likely to appreciate ahead of corporate success. In fact, that rally could be underway.

The shares recently broke out of a declining channel (blue lines). This breakout indicates that the downtrend, which took WPRT down from $40 to $23, is over. And with 26% of the float shorted, the stock is in a great position to fly higher if it can establish near-term positive momentum.

Buyers will need to support $27 (blue arrow) this week to confirm their strength. This shouldn’t be too hard to accomplish because volume has been dreadfully low.

Traders can take a position now and place a stop loss near $25.50. Investors can also buy the stock now, but their stop loss should be much looser (below $22).

Though WPRT broke out of a declining channel, it needs to overcome resistance near $30 before a large rally can unfold. Once the shares rise above $30, a move to $36 should be a breeze, especially as bearish investors rush to cover their shorted positions.