At first glance, the third quarter was a booming success for U.S. banks. The $35 billion in profits U.S. banks was the highest total since before the recession, and was nearly 50% higher than the same quarter a year ago. But those profits were pretty hollow.

The big banks made a profit in the latest quarter mostly by setting aside less cash to cover bad loans. Overall, lending increased a measly 0.3% and revenues were flat compared with the second quarter.

Simply put, the high profits were not a sign that U.S. banks have fully recovered from the subprime mortgage crisis. In reality, the seemingly strong results were nothing more than an accounting gimmick. 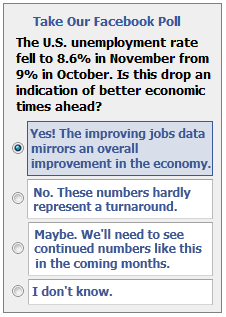 Today, global economic uncertainty continues to weigh on the banking sector. Unemployment here in the U.S. remains stubbornly high at 9%. Plus, there are looming concerns that banks could be severely hampered by exposure to European debt. The six largest U.S. banks have $50 billion in capital exposure to the massive sovereign debt racked up by Greece, Ireland, Italy, Portugal and Spain.

So while the GAAP earnings results may paint a rosy profit picture, investors should continue to be wary of the sector as a whole. U.S. banks still have a long way to go before they can recapture their pre-recession prosperity. And until they do so, their share prices will continue to flounder.

But there is one bank that I believe will rise above the rest.

That bank is Goldman Sachs (NYSE: GS). Goldman is one of the premier financial institutions in America, with a history dating back to 1869. The New York-based investment bank differs from most of the big commercial banks that focus on deposit and loans to consumers and businesses.

During the recent third quarter, however, when most of the big banks were using accounting tricks to report inflated profits, Goldman struggled.

The bank reported $428 million in quarterly losses and laid off 1,300 employees. But last quarter’s results were out of character for Goldman Sachs. While losing money has been the norm at big banks such as Bank of America (NYSE: BAC), Citigroup (NYSE: C), JPMorgan Chase (NYSE: JPM) and Wells Fargo (NYSE: WFC) in the wake of the subprime mortgage crash, Goldman has regularly turned a profit.  In fact, since its IPO in 1999, the company has reported a quarterly loss just twice.

Goldman has typically avoided the same pitfalls its fellow big banks have experienced. How has Goldman done this? By attracting the best talent, employing the smartest people, and using aggressive incentive compensation including rich bonus packages. The result is a company that regularly wins big investment banking clients and has developed an outstanding proprietary trading desk with a record of big profits.

Trading is Goldman’s core business, accounting for 62% of the company’s revenue in the first nine months of 2011. Trading wasn’t the problem last quarter though. The bank’s third-quarter loss was due primarily to reductions in the value of the firm’s investing and lending unit.

Goldman’s investing and lending branch reported negative revenue of $2.8 billion, compared with $1.8 billion in revenue generated a year ago. Nearly half of those losses were attributed to Goldman’s stakes in the Industrial & Commercial Bank of China (Pink Sheets: IDCBY), which had a significant decline in value. Despite its investment losses, overall Goldman generated more revenue last quarter than both Bank of America and Citigroup.

Goldman’s third quarter losses are the product of a volatile climate for investment banks. But the poor showing appears to be little more than a temporary dip. After all, Goldman survived and even profited from the financial crisis when competitors such as Lehman Brothers and Bear Stearns were going belly up. The bank managed to produce all-time record earnings of $3.44 billion in the second quarter of 2009, just months after the bank had absorbed its first quarterly loss since going public. No bank has been more resilient than Goldman Sachs.

Not surprisingly, shares of Goldman Sachs have been taking it on the chin recently. The stock is down 47% for the year, a more precipitous drop in share price than some of its competitors. The decline clearly reflects the recent poor financial performance for the company.

But Goldman may be on the brink of a strong fourth quarter. The final quarter of the year is historically a busy time for dealmakers. With M&A activity on the rise as the year comes to a close, investment banks such as Goldman can expect healthy fees for their advisory services. Additionally, with more and more companies lining up to go public, Goldman stands to benefit as the underwriters of many of those IPOs.

One of the biggest assets owned by Goldman is its people. The investment bank has a history of attracting top talent. In a competitive environment for MBAs, mathematicians, traders, and bankers in the business of high finance, 95% of those who get a job offer from Goldman accept.

The result is a company that gets to select the best and brightest people in the banking sector. These talented people have a proven track record of creating massive profits at Goldman. And that isn’t likely to change anytime soon.

While the Occupy Wall Street protesters would like to put an end to capitalism, I’m willing to bet that capital markets will continue to function for centuries to come. And as the financial markets return to "normal," the premier investment bank in the world should rise again.

A couple months ago at the Value Investing Congress in New York City, I listened to hedge fund manager Boykin Curry give his pitch for Goldman Sachs. Curry thinks highly of the investment bank and expects shares to rebound above $150 in the next two to three years.

He pointed out that Goldman has significant assets and the ability to complete a major share buyback. If the company were to buy back 30% of its shares over the next three years – which it has the cash to do – its stock could vault to $172 a share.

A dramatic turnaround in Goldman Sachs’ stock price may not happen immediately, but the bank has a history of bouncing back from troubled times.

So while profits may be up at other U.S. banks, the bank that took an uncharacteristic loss in the third quarter may be worth a closer look.

Goldman Sachs happens to be the only one of the major big banks that I personally own in my investment accounts. I’ve been buying the stock around $100 per share, and even added to my position earlier this week with the stock down in the low $90s. Like Curry, I’m looking for shares to rise +50% to $150 over the next few years.

Full Disclosure: I currently own shares of Goldman Sachs stock, and have recently been adding to my position.