I’m not worried about the threat of higher interest rates hurting stocks.

That might surprise you. But the fact is that rising interest rates are actually a good sign for the stock market. Let me explain…

There are a million factors that dictate Federal Reserve economic policy. And while it may be fun to try and guess what the Fed will do, that’s not likely to be a good use of time. There are simply so many variables that it’s almost impossible to accurately predict the Fed’s next move.

A better approach is to follow the Fed’s actions and plans for the future. Then look at how stocks have performed in the past during similar situations.

The Fed is not prone to knee-jerk reactions. It doesn’t stand to benefit by trying to fake you out. It generally tries to tell the market what its intentions are. It simply requires careful listening to follow along.

Right now the Fed is telling us that it intends to keep rates low. But that as the economy improves it expects to “taper” its bond buying program, and eventually start moving rates incrementally higher.

So does that mean we should sell stocks now, before the Fed raises rates? Absolutely not.

History clearly shows that stocks don’t fall during periods of rising interest rates. Sure, they might fall a little when a rate hike is announced – maybe for a week or so.

But they usually bounce back quickly. And then they go higher.

The following chart shows the long-term performance of the S&P 500 Index and the Federal Funds Rate dating back to 1980. The Fed Funds rate is the rate the Fed sets for banks to lend to one another, and it is widely viewed as the benchmark for interest rates.

Then, in the beginning of 1988 when the Fed began raising interest rates again, the index rose another 16%. The same result occurred yet again in 1994 and 2000 when the Fed raised rates.

During this entire 33 year period, interest rates were considerably higher than today. And every time the Fed raised interest rates, stock prices rose. The market didn’t immediately go up following an announcement. Instead, it was in the months and year(s) that followed. 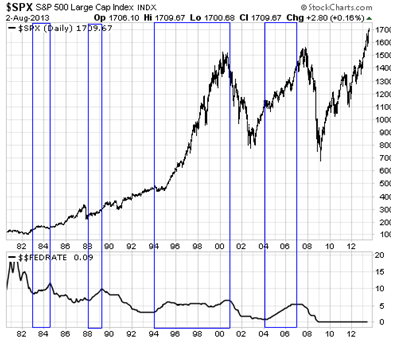 There are a lot of factors that make stocks go up or down. And I’m not pretending to have a crystal ball, or say that interest rates are the only thing that matter. They’re not.

But I do know that the best thing for stocks over the long-term is a healthy and growing economy with high productivity and low unemployment.  And that’s exactly what the Fed is waiting for. When the Fed starts raising interest rates, we’ll know that this economic recovery can stand on its own two feet.

Since history shows that rising interest rates are a sign of economic health and good stock market performance, my advice is to embrace the move as soon as it comes.