When the market closed at 4 p.m. ET on Election Day, the S&P 500 finished at 1,428.39. With President Obama’s re-election that night, fiscal cliff fear replaced pre-election uncertainty at the forefront of investors’ minds. Wall Street pundits predicted that stocks would go in the tank until Congress could reach a deal to avoid the so-called cliff.

Fast forward to this morning, and almost nothing has changed.

The S&P 500 closed at almost the exact same level – 1,430.36 – on Monday, and Congress appears no closer to a fiscal cliff compromise.

It’s December 18, for goodness sake – just two weeks before the impending doom of Obama’s Budget Control Act is scheduled to take full effect on January 1. Where’s all the investor fear every talking head and blogger warned us about?

It seems to have come and gone. Though as we inch closer to the fiscal cliff deadline, it’s sure to be back. With a vengeance.

So far, however, the fiscal cliff hasn’t wreaked havoc the way everyone said it would.

At first it did. The S&P fell off 5.3% in the first seven trading sessions after the election. But stocks have since rallied, getting a nice boost from another record-setting Black Friday along the way.

A simple chart of the S&P 500 over the past six weeks shows the initial panic and subsequent Black Friday rally – leaving stocks virtually unchanged since the election: 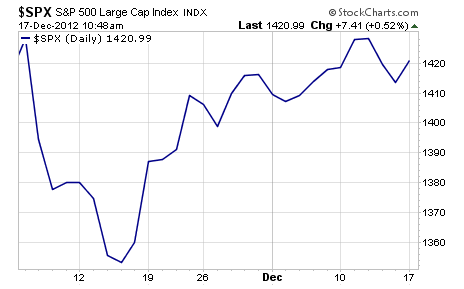 The benchmark U.S. index has now risen for seven of the last nine days. Meanwhile, the VIX – a.k.a. the investor fear gauge – is 12% lower than it was the day after the election.

Don’t get too comfortable, though. All is quiet for now, but to realize just how quickly the market can go south all you have to do is think back 18 months, to July 2011. That was the last time Congress held the U.S. economy hostage by moving at a snail’s pace to come to some sort of fiscal agreement.

Raising the debt ceiling – or risk defaulting – was the issue on the table then. Similar to this month, the S&P was basically flat for the first three weeks of July, actually gaining five points.

But once it got to within a week of the August 1 deadline and a deal still wasn’t done, the bottom fell out. From July 25 through July 31, the S&P declined 4% as fear of a default finally set in. It took a while, but eventually investors panicked.

Americans are chronic procrastinators. We don’t fully grasp the reality of something until the last minute. That’s what happened in July 2011. And if Congress doesn’t come to an agreement THIS WEEK, it’ll happen again.

The fiscal cliff is very real. Soon enough, investors will realize it.

P.S. Want Congress to get moving before the January 1 deadline? Sign my petition to end the fiscal cliff, and we’ll send a copy directly to your local representative in the U.S. Senate. Click here to sign the petition.