The headline retail sales number for October came in better than expected, up 1.4%. Of course, sales were down more than expected in September, so a bounce isn’t a complete surprise.

Interestingly, it was mostly auto sales that drove the decline in September and the increase in October. Remove auto sales from the numbers and retail sales were up 0.4% in September and 0.2% in October.
Those aren’t big numbers and it’s easy to imagine that they could reverse if there are any new shocks to the U.S. economy. But retail sales numbers are a better measure of consumer confidence than polls like the Michigan Sentiment Survey, especially when people are making long-term commitments like car purchases.
I suspect we can attribute much of the bullish bias in the stock market to rising expectations for holiday spending.
*****President Obama is in China this week. I’m sure you’ll read plenty in the media about how Obama is there simply to reassure the Chinese about the U.S. dollar and our deficit. But it’s critical to remember just how inter-dependent the U.S. and China are.
China is an export economy. Without the U.S. consumer, their economy collapses. China will continue to buy U.S. Treasuries because it’s in their interest to do so.
Also remember that China has been pegging its currency to the U.S. dollar since last year. China knows full well that the U.S. dollar is weak against the euro and the yen. China is deliberately piggy-backing on the U.S. dollar to keep their exports competitive.
So why all the lip service about the relative strength of the U.S. dollar? It seems to me it’s just good old fashioned politickin’. We complain about their human rights and slap tariffs on Chinese tires and steel, they gripe about our currency and deficits. It’s pretty standard stuff…
*****I received an excellent question on Friday from a Daily Profit reader. Lee M. asked "Ian, would you purchase Silver and/or Gold now with the Dollar tanking or wait?"
The first thing to understand here is that gold and silver are up because the dollar is tanking, not in spite of it. On the most basic level, when the dollar falls in value, it takes more of them to buy something. And that’s especially true for commodities.
Demand has an impact on commodity prices, of course. If nobody wants copper, for instance, its price will fall regardless of the dollar. There can be no doubt that the weak dollar is part of the reason that oil prices have been steady in the $70’s.
Silver and gold are a special situation because these metals are perceived as having implicit value that will exist no matter the dollar’s value. Plus, in gold’s case, there is also an economic aspect – gold is considered to be a store of value in hard economic times. In other words, investors believe gold will hold its value when all other asset classes decline.
It’s no coincidence that gold started moving higher in the Fall of 2007 – right about the time that Meredith Whitney was articulating the growing fear that banks were in danger. It’s also no coincidence that, with the exception of the brief spike lower when Lehman Bros. went bankrupt, gold prices have held firm above $800 an ounce. (And as I write this, it’s around $1,130.)
An important thing to notice is that gold has made a new high this year. Silver has not. To me, that says gold is trading higher because of ongoing economic fears as well as the weak U.S. dollar.
Silver, on the other hand, is the pure play on the U.S. dollar. Now, let’s have a look at that US Dollar Index chart again… 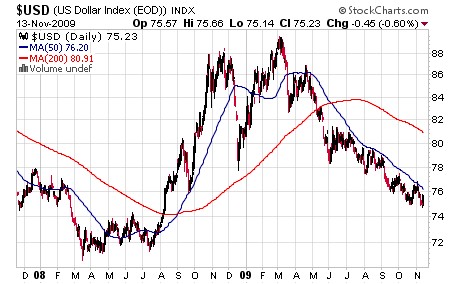 I selected a 2-year chart because it shows the dollar index’s 2008 lows around 72. If the dollar returns to those levels we will see a new high for silver and gold. Gold, however, can continue to move higher so long as the dollar stays where it is, because investors remain concerned about the U.S. economic recovery.
The bottom line is that gold may be the more reliable trade right now, but silver has more upside if the dollar continues lower.
Now, this gets to the heart of the matter as to why I’ve been recommending gold miners. Gold doesn’t have to move significantly higher from current prices for gold miners to post huge gains in profitability because their costs are essentially fixed, meaning that profit margins expand as the price of gold moves up. So long as gold remains fairly stable, miners will be locking in gold sales at attractive prices.
A dollar rally might knock silver miners much lower, but that’s not necessarily true for gold miners. For investment purposes, the risk/reward scenario is better for gold miners. For trading purposes, there is more upside for silver if the U.S. dollar heads lower.

To get my top gold mining recommendations, Click HERE.