You hear it all the time…but it’s completely false.
In fact, I use this one simple myth as a barometer to gauge someone’s investment legitimacy. If they spout this myth, I know they’re full of it.
This myth goes something like this: “The stock market is near record highs – so it’s getting expensive.”
It’s a tempting myth. With stocks near record highs, many investors think the market is richly priced. However, this might not only be the biggest myth about the stock market today – but also the most potentially damaging to your long-term wealth.
As the preeminent value investor Warren Buffett says, “Price is what you pay.  Value is what you get.”
Price alone would have you believe that Tesla Motors (NASDAQ: TSLA) at $96 is worth more than General Motors (NYSE: GM) at $34…even though General Motors is four-times the size of Tesla.
Similarly, you might have believed that Berkshire Hathaway (NYSE: BRK) shares were overpriced in the year 2000 when a single share cost $44,000. After all, that share of stock was the most expensive share to ever trade on the New York Stock Exchange.
But price alone has little to do with value.  And the disconnect is downright obvious when I look at the stock market today.
Last week I had a television installed in my office.  And since then I’ve made the mistake of keeping CNBC turned on in the background.
Yesterday for example, all the talking heads could discuss was whether the Dow would close below 15,000.  As though that was a meaningful measure of anything.
The fact that stocks are near an all-time high has absolutely nothing to do with the value of the market today. And it has even less to do with the relative valuation of individual companies.
The S&P 500 Index today is trading at the same level as it was back in 2000 and 2007. Following those highs, the stock market crashed and many investors lost their shirts. But all that tells us is the price …
Let’s look at the value of the market.
Based on “normalized” earnings, the S&P 500 is currently trading around 18x earnings.  Turning back the clock to 2007, the market toped out at 25x earnings. And going back to 2000, stocks were trading at 41x earnings. 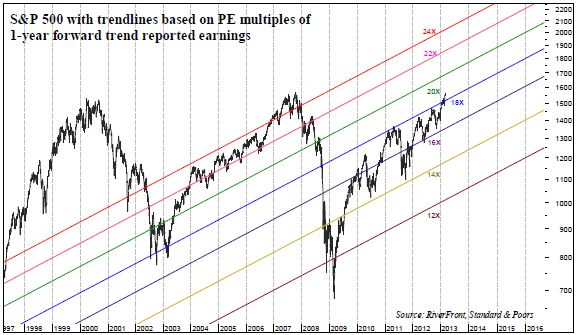 How is this possible?
The simple answer is that earnings for the S&P 500 companies have doubled in the last 13 years. That’s right.  In spite of the dot com crash, September 11 recession, and the housing bubble of 2007 – earnings from the biggest U.S. companies have increased by more than 100%.
Put another way – you can buy stocks today at a 50% discount to 2000.  And the S&P 500 Index – which was grossly overvalued in 2000 at around 1,600 – is now reasonably priced.
Valuations have been ticking up as confidence builds in the economic recovery, and more investors buy stocks. That’s a good thing for those of us who own stocks today.
But a PE multiple of 18 is within a normal range. Not too cheap, not too expensive.
This is especially true when you consider that the S&P 500 Index delivers a 2% yield. And in a 0% world, that makes the valuations downright attractive compared with the alternatives.
I’ll be staying the course: I’m overweight stocks for the long term. And I’ll be keeping CNBC turned off so I can focus on the big picture and not the play-by-play commentary.