Several weeks ago, the 10-year interest rate on U.S. Treasury notes jumped to 2.7%, the highest in 15 months and 42% above where rates were one month prior.

Is more upside potential from here?

One would think so, but I’m here to tell you that’s not the case. Here’s why…

Bonds, as witnessed by the iShares T-Bond 20+ (NYSE: TLT), closed below its lower Bollinger Band last week. Take a look… 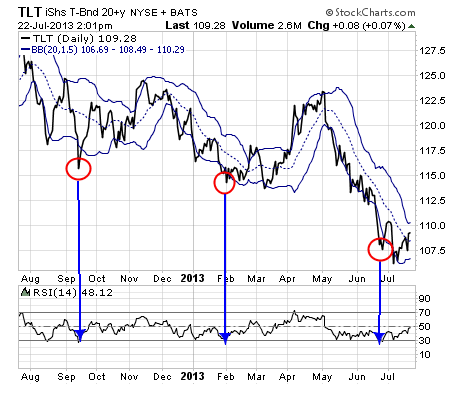 In short, when an underlying asset breaks the outer bands, it’s a rare occasion. It tells us that the stock has moved too far in one direction too quickly.

And typically, a short to intermediate-term reversal typically follows.  In the chart above TLT has broken the lower band which is often interpreted as a “buy’ signal by most professional investors.

As you can see, that happened two other times over the past year – in September and February. Following each signal, TLT moved significantly higher over the next five months.

Also, notice the 14-day relative strength indicator (RSI) below the chart. RSI (14) provides an intermediate term (3-6 months) measure of overbought or oversold conditions. Each instance noted on the chart marked areas of extreme oversold readings. When this type of reading occurs coupled with a breach of the Bollinger Band a move a reversal in the current trend is soon to follow.

Economic forecasters would have you follow employment reports, manufacturing index readings, real GDP growth, yield curves and the like. But I can tell you that professional traders, particularly professional options traders, don’t care about the latest economic data. We prefer to keep things simple.

Applying this model, unless you truly believe the FOMC is about to hike interest rates,  which Bernanke adamantly denies doing for the foreseeable future,  the 10-year rate is unlikely to rise much further.

So what does this mean for income investors?

Well, for 2013 it probably means more of the same. Dividend-yielding stocks should continue to perform well. And for those of us who sell options on those highly-liquid, blue-chip dividend stocks like MSFT (MSFT), Altria (MO), AT&T (T) we should expect to see success until year’s end.

If you are interested in learning more about conservative options selling strategies please feel free to email me at [email protected].