*****I received a very topical question from a Daily Profit reader …
Do you think that Obama is a legitimate "for the ordinary people" real deal, or is he just another cleverly marketed pretty face representing the interests of the ruling class? If you prefer call them the rich, the wealthy, the owners, the bosses … whatever works for you. In the end they are the same people. I deliberately did not label them as capitalists because I believe that they are corrupt capitalists, scamming the game in their favor even though their performance is proven to be mediocre. In real capitalism, ability and performance matter. As in, let the failed banks, brokerages, etc fail and allow the strong to take them over. When I read about these recent government led bailouts it becomes clear that we have been set up and conned into taking the hit for the unworthy managers, making it possible – inevitable – for the rich to triumph regardless of their audacious arrogance and incompetence.  This is not what I understand capitalism to be – and it stinks!
I have to admit, I started to get sucked in by the President’s charm the day he stood on the steps of the Capitol and told us of the sacrifices and hard work that lay ahead for Americans.
I also must now admit that I am extremely disappointed in how President Obama he has dealt with continuing problems on Wall Street. He has repeatedly shown that he is unwilling to take a hard line with the likes of AIG, Citigroup, Goldman Sachs and all the rest.
When the bankers can dictate policy, America is in serious trouble. That’s what got us to where we are now and quite frankly, President Obama doesn’t seem to be changing this situation, for whatever reason, and you’re right: it stinks.
Wall Street has essentially robbed America. And now Washington is driving the getaway car. Washington is essentially helping Wall Street with the cover up, doling out ridiculous sums to maintain the status quo.
Americans should be outraged. Why there aren’t massive protests against the way Washington is continuing to let Wall Street run the show is beyond me. I’m not talking about partisan actions like the "Tea Parties" to protest tax hikes. And there aren’t any specific policies that have led to this situation. It’s a culture, a revolving door between Washington and Wall Street.
Treasury Secretary Tim Geithner’s plan to overpay banks for the toxic assets using taxpayer money is a prime example of just how sick the system is. And it’s complete and utter BS. Take the banks over, fire all executives, remove the boards of directors, strip out the toxic assets and sell the banks back to private investors. Period. That’s the only way to end this mess.
So long as the Obama administration continues to place the interests of Wall Street above the interests of Americans, it cannot be considered an agent of change. And I couldn’t be more sad about the unwillingness of those in power to do what’s right.
There is an excellent article in this month’s Atlantic that discusses how Wall Street has essentially taken over Washington. It should be considered required reading. Here’s the link.

*****It’s Newsletter Advisors Wendesday. Today, we get another round of options trading ideas from Bryan Bottarelli of Bottarelli Research. Enjoy.

To stay on top of the market volatility, I once again pulled up a chair with Bryan Bottarelli. As you know, his service – called Bottarelli Research – consistently delivers solid performance. That’s why it’s always smart to get his top trading ideas and share this information with Newsletter Advisors members like you. He is currently editor for three services that trade options (his flagship service), LEAPs and small caps.
Q: Hi again Bryan. Every time we talk, you have some great trading strategies. So let’s get right into it. What’s working for you right now?
A: Over the last 5 weeks, we witnessed one of the strongest market rallies since the 1930s. But throughout this upward push, I told my Bottarelli Research members that I was extremely skeptical of the move. You see, a good chunk of the rally was fueled by a record profit report from Wells Fargo, which appeared very suspicious. After all, nobody had a clue as to how Wells Fargo reported their blowout earnings. What’s worse, WFC refused to provide any details on how they arrived at their numbers!
But here’s the important thing…even though I didn’t trust the rally, that didn’t mean that my Bottarelli Research members didn’t profit off the rally. You see, in previous interviews, I’ve spoken about the trading tactic that entails "not fighting the tape." In other words, if the market wants to move higher, don’t fight against it. I admit, that’s quite difficult to do, especially if you do not believe that the upside move is for real. But when it comes to successful trading, adopting this strategy is a critical element of profitability.
Given the fact that the markets were rallying, I identified two specific market sectors that looked to have strong upward momentum. Those two sectors were Chinese-based telecom companies and small cap biotech companies. Since both of these sector groups were exhibiting results that were out-performing the major market averages, I carefully recommended adding upside calls on China Mobile Limited (CHL – NYSE) and Dendreon (DNDN – Nasdaq). Specifically, I recommended the DNDN April 5 Calls (UKO DA) for $1.75 per contract and the CHL May 50 Calls (CHL EJ) for $1.25 per contract. Two days later, we sold both positions for gains of 42.86% and 21.60% respectively. And remember, we took these profits despite the fact that we did NOT believe in the market rally.
Q: What did your members think of these trades? Did you give them both the BUY and the SELL signals for the DNDN and CHL trades?
A: For the most part, my members agreed that the rally was bogus – but they also understood that it was important to get positioned to profit as the upside move continued. As a result, they were quite pleased with the outcome of these trades.
As you can see, Bottarelli Research is designed to not only give profitable trade recommendations – but it’s also intended to offer you an unbiased look at the financial events that are moving the markets. While every money manager is telling you to "hold for the long term," and every financial television show is telling you to "buy this bottom" Bottarelli Research members understand that the true value of my service comes in the brutally honest assessment of the market’s daily moves.

In terms of the second part of your question, I always give BUY and SELL instructions for every single recommendation that I make. That way, you always know when to enter and exit each position.
Q: Can you offer us three new trades that someone can act upon right now – and hopefully be just as explosive?
Right now, I feel like that the markets have temporarily topped out – and we’re now due for some selling pressure. Therefore, I’m currently getting my Bottarelli Research members positioned in three powerful "Ultra" positions, which move at a rate of 2x and 3x their respective benchmark averages. If we experience the pull-back that I expect, all three of these plays will catapult aggressively higher.
The first one is called the Direxion Financial Bear 3X Shares (FAZ), which moves at a rate of 300% of the inverse daily performance of the Russell 1000 Financial Services Index. In other words, if the Russell 1000 Financial Services Index moves down 3% on the day, the FAZ is designed to move UP 9%.
Right now, I feel that our financial system is in one of the most fragile moments in history. Over the last five weeks, the sentiment on Wall Street seems to indicate that the problems have been addressed – and all the problems in the financial system have now been corrected. I do not believe this one bit.
Don’t let the Fed and the Treasury pull the wool over your eyes. From what I’m reading, 16 of the top 19 banks in the nation are technically insolvent. What’s worse, if any two of the 16 insolvent banks go under, they’ll totally wipe out all remaining FDIC insurance funding. This is a very scary situation. And it makes a very strong case for owning the FAZ right now.
If you look at the FAZ chart below, you’ll see that this was a $120.00 asset in early March. Now, after a furious rebound in the financial sector, you can own FAZ for under $11.00! If we see another aggressive pull-back in the financial sector, you could realistically see the FAZ return to their March highs. Heck, if it moves up to $50.00, that’s still a 400% gain from current levels! 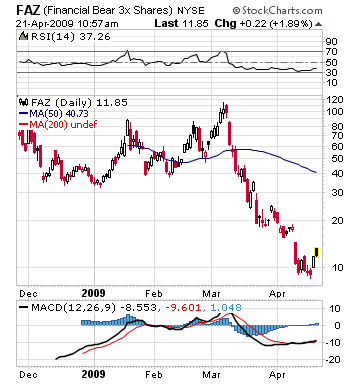 My second pick is the UltraShort Real Estate ProShares (SRS), which moves at a rate of twice the inverse of the Dow Jones U.S. Real Estate Index. Similar to the FAZ, the SRS has fallen aggressively in recent action, pushed lower by a near-term recovery in the Real Estate sector. But if you study the time-horizon and the percentage decrease of past real estate collapses, you’ll realize that we’re nowhere near the bottom.
Housing prices are down 28% from their bubble peak in 2006, but they still have a ways down to go before getting back to their pre-bubble levels. You see, the average real estate crisis sheds 35.5% of the value off homes. And the worst crisis on record peeled off 54%. So, if we’re experiencing just an "average" crisis, you can expect prices to move down another 7% to 10%. And in the world of real estate, this move could easily take another year or two. Now, if we hit the levels that we reached during the worst-ever crisis, you can expect another 26% drop. In other words, we could be only halfway through the current crisis. Ouch. In short, you can expect more problems in the commercial real estate sector. As a result, adding SRS makes a lot of sense as well. 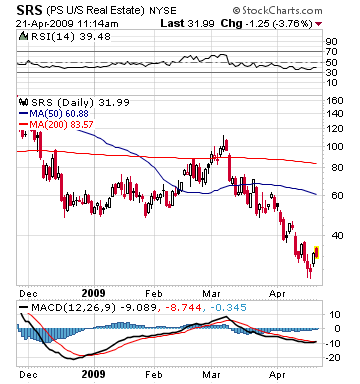 And finally, my third pick is the Ultra Gold ProShares (UGL), which moves at a rate of twice the performance of gold bullion. If the markets begin to pull back, as I expect, then you’ll see a rush of investment dollars flowing back into gold. Therefore, adding the UGL at today’s low values puts you in position to leverage any upside move in gold at a 2 to 1 rate.
Considering the unprecedented levels of U.S. debt (both on a governmental and consumer side), I feel that owning gold exposure is one of the safest and smartest plays you can make right now. I strongly recommend that everyone own gold in their portfolio. 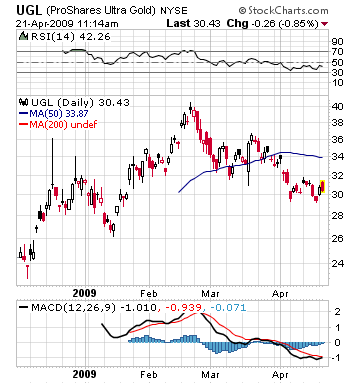 Editor’s Note: For a limited time Bottarelli Research  is extending a special 9-month discount for any Newsletter Advisor members who want to join his service. If you’re interested in taking this special discount, follow the link below (and choose the special 9-month offer noted with a red star).
http://www.bottarelliresearch.com/options/offer/H9DQFVY943/