This past Monday, one of our research analysts – Jason Cimpl – caused quite a buzz on our Web site, as well as in our office, with a provocative article on the November presidential election.

I thought it important to follow up Jason's insights from an alternative prospective … one where speculators put their money directly at risk on election outcomes.

Let's face it, polls are meaningless. The questions are leading and the polls themselves are often commissioned by the two major political parties. Each party is motivated to put its candidates in a favorable light, so party-commissioned polls will obviously favor that party's candidates.

How do I know this?

There are two established predictive markets where speculators can directly bet on the outcome of the 2012 election: Intrade.com and Iowa Electronic Markets.

InTrade is the newer of the two, having opened in 2002. Intrade is an open exchange that offers participants the opportunity to buy and sell shares among each other (like a stock market) on a particular event. The event settles at $10 or $0 share.

For example, if you buy an Obama share selling at $5, you'll be paid $10 and profit $5 if he wins the election. Should Obama lose, you'd lose your $5 investment.

The Iowa Electronic Markets (IEM), run by the University of Iowa's Henry B Tippie College of Business faculty, operates similarly.  IEM allows anyone interested to speculate on political markets.  Trading accounts can be opened for $5 to $500. Participants then use their funds to buy and sell contracts.  The payoff matrix is $1.00 or $0.00.

So who do speculators favor in the November presidential election?

Speculators on the IEM, which has accurately predicted each presidential election since 1988, are especially bullish on Obama's prospects. Contracts on Obama are trading at $0.62 each, compared to $0.38 for Romney.

Contracts favoring Obama have rallied strongly over the past two months after experiencing a sustained sell-off in June, which dropped the contracts to a low of $0.54. 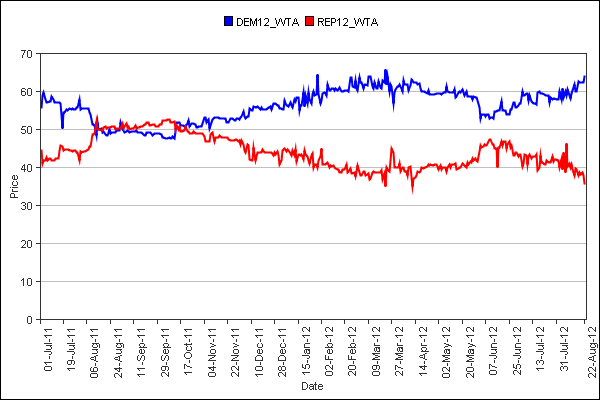 The price action on Intrade has followed a similar, though somewhat more volatile, trajectory. The bottom line, though, is that Intrade speculators also have Obama ahead. Shares on Obama are currently trading at $5.76 each, which means Intrade speculators give the current president a 57.6% change of holding onto the White House.

But I'm not concerned with politics. I'm concerned with markets. And if the elections holds as the speculators presently predict, it could turn out to be a very profitable market for long stock investors in 2013.

Data collected by Jeff Hirsch of The Stock Trader's Almanac show that it's not Republican presidents that produce strong stock markets; it's Republican congresses. Markets gain about 16% on average when Republicans control Congress. But the gains average 19.5% when they control Congress with a Democratic president, according to Hirsch.

Many of us won't get our way politically in the upcoming election. But if the speculators' predictions hold, we could very well get our way financially.