We all know that stocks have been on an incredible run over the last six months. The S&P 500 has gained almost 25% since the October low, making for one of the best six-month periods in its 62-year history.

But while the rally has been impressive, there are two reasons to be concerned about a correction.  First is the volume and second is the lack of fear in the market.

Back on February 15, I wrote an article for Daily Profit entitled Beware of a Volume Spike – It Could be a Bad Sign that discussed the volume downtrend and its potential impact. We didn't get a huge volume spike to break the downtrend then, but we did during the week of March 12. 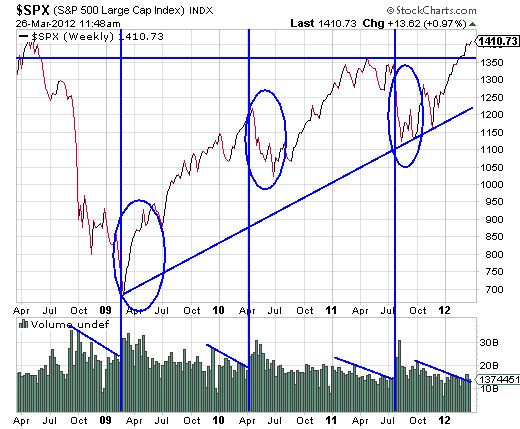 Given the way these volume downtrends have signaled reversals in the S&P once they were snapped, I think this is the first reason to exercise caution for the next few months. The second reason comes via the CBOE Volatility Index (VIX). The VIX recently dropped below the 15 level for the first time since last April. In fact, the VIX dropped as low as 13.66, the lowest reading since June 2007.

The VIX measures volatility in the market, though it is commonly referred to as a fear gauge – when readings are high, volatility is high and investors are more fearful. And low readings imply lower volatility and less fear. From a contrarian viewpoint, it's time to worry when investors are showing little fear.

In the two charts below, note how the market performed after the VIX dipped below 15. 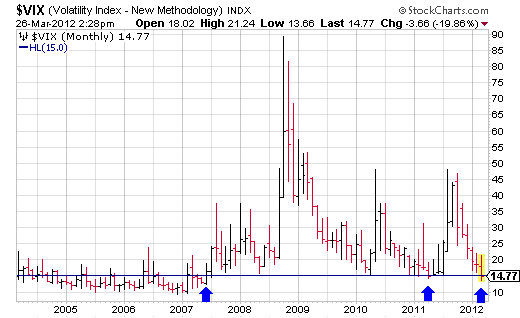 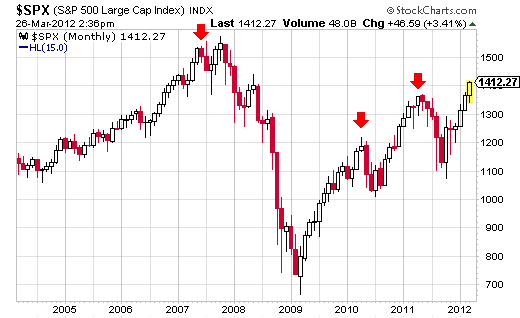 The VIX dipped below 15 in April 2011, right ahead of a five-month losing streak for the S&P. The VIX dropped in April 2010, but only got as low as 15.23. Despite staying above 15, the S&P suffered a drop of almost 200 points from May through early July that year. Finally, the VIX was below 15 in June 2007, just before the market went into a bearish cycle.

This week may not offer much selling pressure, as it's the last week of the quarter.  Institutions will do everything in their power to protect their gains from the first quarter because their fees are based on assets under management. A 12% increase in assets thanks to the rally in the first quarter essentially gives the institutions a 12% pay increase.

However, once this week is over, April will mark the beginning of the second quarter.  And the next earnings season will be right around the corner. When you combine the VIX signals and the uptick in trading volume, I highly encourage investors to exercise caution over the next few months.