I couldn’t be happier with my new truck.

My old rust bucket, which I bought in 2002, finally bit the dust. It was getting more expensive to maintain each year than it cost to finance a new one. So I bought a new 2013 Toyota Tacoma.

My experience is in no way unique, by the way. Car showrooms are once again bustling as consumers play catch up for years of deferred purchases.

Over the last six months, 7.8 million Americans have opened their wallets and bought a new car or small truck.

That fact has the auto industry – and industry analysts – all jazzed up about the next couple of years. Optimism is driving many auto-related stocks to 52-week highs as manufacturers and dealers cash in on the growth.

And this isn’t just another result of government-driven demand, like the cash-for-clunkers program that gave a temporary spike to sales and that was integral to the auto bailout of 2009. This is the real deal. Americans want new cars.  And more importantly, they can afford them.

U.S. consumers are once again buying big ticket items like cars and trucks because household net worth and consumer confidence are back near pre-recession levels. 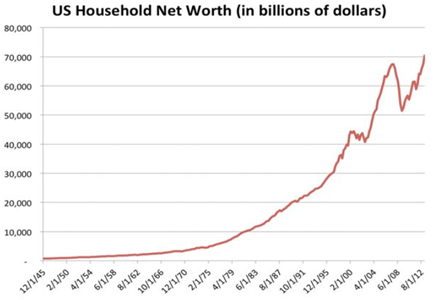 And equally important, these purchases show that consumers have faith in the economy moving forward.  The vast majority finance these purchases instead of buying them outright, so committing to the payments is no small decision.

And of course access to credit shows that banks have confidence in the economy too – not to mention confidence in consumers’ ability to pay back those loans.

Clearly auto manufacturers are one of the main beneficiaries of the industry’s resurgence. Ford (NYSE:F) led the way in June with sales rising 13.0%. Meanwhile, growth at both Toyota (NYSE:TM) and General Motors (NYSE:GM) surpassed 8.0%.

As a result of the impressive comeback, shares of automakers have been among the best performing in the market.  The average gain for the three I just mentioned over the last year is 74.6%. 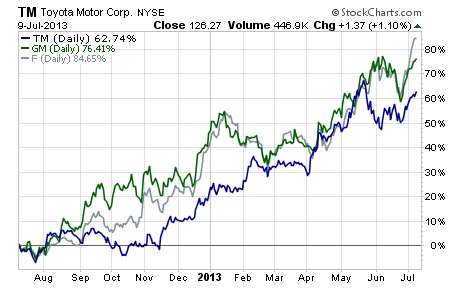 While many investors may think they missed the boat on this rebound it’s important to keep the recovery in perspective. In many ways it is like the housing industry – things were going gang-busters until around 2007-08 and then the bottom fell out. Feeling poor and scared, few people were out buying cars (or houses) for several years.

Kicking and clawing both consumers and the auto industry have fought back. Years of pent up demand should power many more years of steady purchases.

I’ll get into more details on how to play the auto industry’s rebound in the future. For today, my message is simple – this resurgence is not a fad. It’s the real thing and we can make money investing in the trend.