The government shutdown is entering its second week. That’s made for some uncertain times on Wall Street. But so far, investors aren’t panicking.

Stocks fell half a percent last week, alternating up days with down days as the government shutdown took effect last Tuesday at midnight. That’s not the mass sell-off some analysts were expecting. But the volatility was indicative of the kind of uncertainty that has taken hold on Wall Street.

Investors’ consternation about the shutdown is warranted. Putting an estimated 800,000 federal employees on furlough is said to cost the U.S. economy as much as $1 billion per week. Some economists estimate that a three to four-week shutdown could cost as much as $55 billion.

Projections aside, it’s what we don’t know about the ramifications of a government shutdown that’s causing investors to sweat. There isn’t much recent precedent for government shutdowns. The last one occurred in late 1995 and early 1996.

Look at what happened to stocks during that record 21-day shutdown: 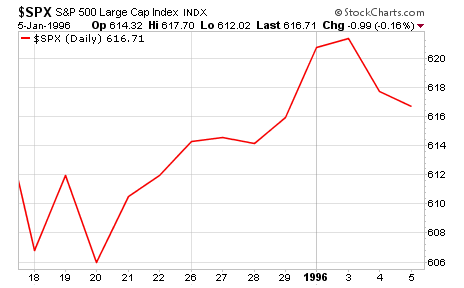 It’s interesting that after an initial pullback in the first few days after the shutdown began on December 16, stocks rebounded and actually gained 2%.

Perhaps the Christmas holiday helped. Holiday shopping season is usually a boon for investors – apparently even with a large chunk of the work force on furlough.

As we saw last week, a short government shutdown might not be catastrophic for investors. A long shutdown, however, could have a profound impact on the markets – especially if it’s coupled with a U.S. default on its federal debt.

The Treasury Department has set an October 17 deadline to yet again raise the nation’s borrowing limit. If the limit isn’t raised before then, the U.S. will default on its debt. Should that occur, the double whammy of a debt default on top of a government shutdown could devastate the U.S. economy.

The government shutdown is already impacting the economy. Those 800,000 federal employees who aren’t getting paid while Congress drags its feet aren’t spending a whole lot of money right now. With every passing week, that kind of rampant belt tightening puts a dent in the U.S. economy.

Failing to raise the debt ceiling would only make things worse. It would require the government to cut spending by about a third, and potentially delay Social Security checks and paychecks for military personnel. Because the government is a big employer and contributor to economic activity, a long shutdown plus a debt default could do serious damage to America’s GDP growth – and possibly drive up the unemployment rate again.

Of course, we’ve been here before. This is the fourth time in two years that the government has flirted with a default. The previous three times, a deal got done at the last minute.

But there’s more on the line this time. We’re already in the midst of a government shutdown. The longer it goes, the worse it’s likely to be for investors and the economy as a whole. A default on top of that could be the last domino that pushes us past the brink.

Right now, the tone on Wall Street is one of uncertainty rather than panic. If the shutdown doesn’t linger more than another week or two and a default is averted, chances are there won’t be too much damage done.

If 1996 tells us anything, it’s that a multi-week government shutdown isn’t necessarily a death sentence for investors. Anything beyond that, however, would push us into uncharted territory.