If you want to make money in small-cap stocks, don’t rely on a single ETF.
The fact is that many of these funds aren’t fully invested in small-cap stocks.  Because of their strong performance year-to-date, many of the most popular small-cap ETFs are now heavily weighted toward larger companies.
This means ETF investors aren’t buying small caps at all in many cases. They’re buying mid caps instead.
A small-cap stock is commonly defined as one with a market capitalization between $300 million and $2 billion. Above $2 billion and we’re into mid-cap territory, and below $300 million it’s considered a microcap.
Let me show you exactly what I mean. I pulled the average market cap of the top 20 holdings of the iShares Russell 2000 Small Cap ETF (NYSE:IWM) this morning.
The average is $3.82 billion. Not one of the top 20 holdings has a market cap below $3.1 billion – not even close to the $2 billion cutoff.
That average is way too big for me if I’m looking for small-cap exposure. And the argument that there are nearly 2,000 stocks in this ETF doesn’t pass muster with me either.
According to Russell Indexes, which designs the underlying fund, the weighted average market cap of the index in August (its most recent data) is $1.4 billion. Even though that figure is better than $3.1 billion for the top 20, it’s still too large.
If I’m buying an index fund to gain access to small growth companies, I want the average market cap to be less than $1 billion. That leaves room for these stocks to (hopefully) appreciate before they are removed from the index when it is reconstituted every May.
To accomplish real small-cap exposure, investors are better off looking at microcap funds like the iShares Microcap Index (NYSE:IWC). As of August, the weighted average market cap of the underlying index was $390 million. And when I pulled the average market cap of the IWC’s top 20 positions this morning, I got $873 million.
That’s a much better representation of the small-cap asset class, which investors typically buy to get exposure to the fastest growing small companies in the market. The goal is, of course, to grab that extra performance from these rapidly growing companies during a bull market.
And as the following chart of year-to-date returns shows, the microcaps are handily outperforming their larger brethren. The IWC microcap index (red bar) is up 24.6% versus 21% for the IWM small-cap index (blue bar). For comparison purposes I also included the IVV mid-cap index (green bar) and S&P 500 Index (pink bar), which are up 19.3% and 15.2%, respectively. 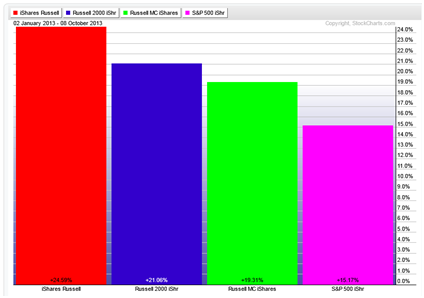 So not only are investors not getting the right small cap exposure with funds like IWM right now, they’ve also missed out on that extra performance that they’re seeking during a bull market.
Just to set the record straight, I don’t have anything against the IWM small-cap ETF per se. It’s a good fund, with a lot of great companies in it. That’s why shares of these companies are going up.
But as it’s constituted right now, it’s not giving new investors exposure to what I consider to be the small-cap asset class. To accomplish that goal without waiting until next May when the indices are reconstituted, a microcap ETF like the IWC is much better.