But what if the gold crash didn’t surprise every investor? What if a few powerful people orchestrated it?

Hugo Salinas Price – Wharton grad and president of the Mexican Civic Association Pro Silver – thinks foul play was involved. After retiring from the business world, he set out to fix fiscal policy in Mexico, and is also huge a proponent of investing in precious metals. He believes that collusion among major banks helped take the price of gold down by more than 16% in five days. In fact, Mr. Salinas Price compares this collusion to psychological operations (PSYOPs) often used by the U.S. Army and DoD.

PSYOPs are planned operations to convey selected information and indicators to audiences to influence their emotions, motives, objective reasoning and ultimately the behavior of governments, organizations, groups and individuals. Sounds sinister, doesn’t it? Well, it is.

For years, investors were pushed toward gold as a way to protect their portfolios from danger. But that tune started to change about a year ago. Though few banks advised selling gold, analysts grew less positive despite obvious global turmoil.

Mr. Salinas Price argues that banks were grooming us to avoid buying gold during the past year as they waited for the right time to strike by buying tons of gold at lower prices. That time – according to Mr. Salinas Price – was when the fear of bank runs in Europe was high.

Normally, that fear would have driven investors into frenzy, sending gold higher. However, the negative grooming by the banks kept investors from buying gold during the bank run – or even after the now famous “template” comments by Dutch politician Jeroen Dijsselbloem.

The banks had successfully made the gold bugs nervous. So nervous, in fact, that they were thinking of selling at a time when they would normally be buyers.

Then Goldman Sachs (NYSE: GS) released a report on April 10 that recommended investors sell gold stakes and take a short position in the metal. Overwhelmed by emotions, investors acted like a deer in headlights. Most got run over, while only a few escaped alive.

This hysteria – argues Mr. Salinas Price and other gold bulls – allowed major institutions to buy the metal at low prices. 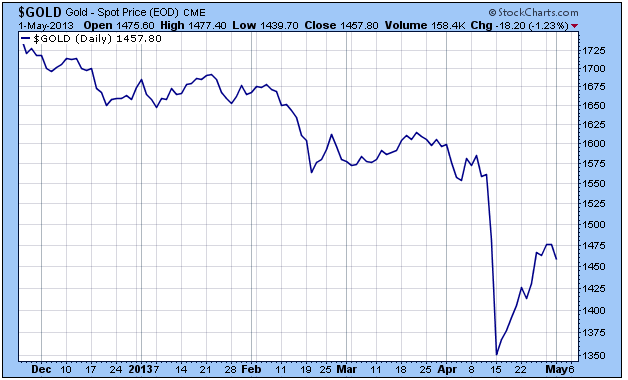 Though there is some merit to this theory because Goldman curiously called off their short recommendation on April 23, I’m not so sure that I’m ready to claim collusion. Moreover, I don’t think major market participants intentionally used PSYOPs to drive investors out of gold during the past year.

True, something does smell fishy. Goldman and other banks likely profited from a decline in gold prices they promoted. And some may have used that high-volume selling as another opportunity to buy.

It’s also suspicious that Goldman would flip-flop so quickly. However, analysts are allowed to change their stance whenever they deem fit. Moreover, analysts at times are going to be wrong. How many analysts predicted Apple (NASDAQ: AAPL) was worth $1,000 last year? And what are they saying now?

Mr. Salinas Price is entitled to his opinion, but the recent decline in gold prices isn’t a case of collusion. Inflation is not picking up in the way most investors anticipated it would. Moreover, yields have been climbing. Gold typically performs best when 10-year yields are lower than the inflation rate.

However, we both agree that gold prices will likely move higher over the next several years. Inflation cannot remain below 3% for an extended period, especially as employment improves. Since Bernanke is not going to raise rates soon, the gap between inflation and yields will widen, pushing the price of gold and other precious metals higher.

Where do you think gold will be in a year? Do you think the banks conspired against investors to bring the price of gold down? I’d love to hear your thoughts. Please leave a comment below.

Editor's Note: If you would like to learn how you can bank steady gains with well-timed investments in stocks that are ready to run… then consider taking a free, 30-day trial to our growth stock service, Top Stock Insights. You'll discover exactly how we're earning exceptional returns and get instant access to every special report and investment recommendation. Click here to try Top Stock Insights, free.