Apple (Nasdaq: AAPL) shares have been on a tear ever since the company’s poor earnings report last week.

In fact, the tech behemoth has surged more than 5% in the last week.

More importantly, if you attended my latest webinar, Getting Started with Options: Two High-Probability Strategies for Consistent and Easy Income, you were fortunate enough to learn how to triple those gains during that same time frame. (And by the wave of emails I’ve received over the past few days, many of you were able to take advantage of the Apple trade – congrats!) I didn’t speculate on the direction of the stock. Rather, I used a statistically-driven strategy that profits if the stock moved infinitely higher, stayed the same or even moved 5% lower.

The strategy is called a Bull Put spread. It is one of the FEW preferred options strategies used by professional traders. Best of all, it’s easy to use.

And here is how it’s done.

As you can see in the chart below, Apple shares took a dive after earnings. 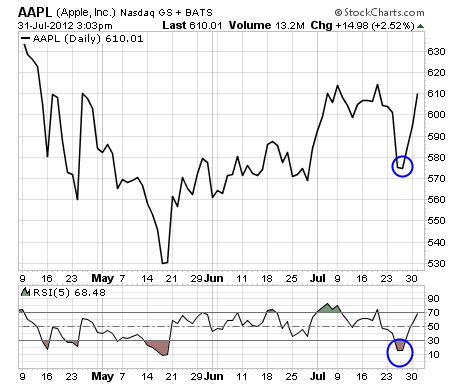 But for most professional options traders, the sharp decline was a blessing.

Because most options traders, like me, are contrarians at heart.

The sharp sell-off pushed the stock into a short-term oversold extreme (as seen by the circled RSI reading in the chart). And this is exactly what I look for everyday – highly liquid stocks or ETFs that are at short-term oversold/overbought extremes.  Once these extremes enter my universe on the 30-40 ETFs and roughly 50 stocks that I follow, I then decide on an appropriate strategy (again, I speak about this in great detail in my webinar).

In the Apple scenario, with the stock becoming quickly oversold, I made the assumption that the shares would move higher, at least over the short term (1-5 days). Therefore, I used a bullish options strategy – a Bull Put spread.

A Bull Put spread allows me to create my own probability of success and define my risk. Meanwhile, using the bull put spread strategy allows for a margin of error. As long as APPL closes above my chosen short strike of $545, the trade is profitable.

The first thing I do is to choose a credit spread with a probability of success above 80%.

By looking at the probability of the sold option expiring out-of-the-money (also known as the option’s delta), I can accurately choose my own probability of success. In this case, I chose the August 545/540 bull put spread with a probability of success of roughly 80%. This means that the market is telling me that AAPL has only a 20% chance of closing  below $545 by August 17 (August options expiration).

At the time I placed the trade, AAPL would had to have moved more than 5% lower from its price of $575 before the trade began to reach break-even. The trade will suffer its maximum loss if AAPL moves below $545.

But AAPL did exactly what I thought it was going to do – it rallied. And rallied hard.

Now the trade stated above is essentially worthless so I can buy it back for roughly $0.05 – a 14.3% gain. In other words, I can keep almost all of the $67 per spread that I collected up front. All I have to do is buy back the spread and lock in the profits.

Why risk trying to make an additional $0.05 and potentially lose all of my profits? Pay the commissions and take your gain. Rinse and repeat.

I hope this is helpful for some of you who are new to options. It is my goal to help you understand some of the more effective ways to trade options and not use the highly speculative methods that have been touted over the years.