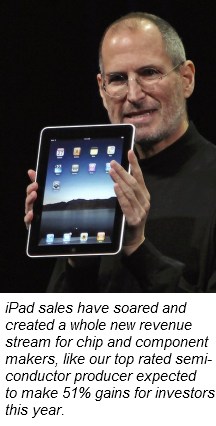 In fact, Gartner says sales of tablets will be so strong that it will
“dramatically” reduce sales of laptop computers for 2011 and 2012. HP,
Acer, and Dell, the three top largest notebook makers, are already
scrambling to find competing products.

And here’s one semiconductor stock with a P/E of 5 that could easily rise
51% on tablet sales.

But now Japanese chip companies are having supply problems because of the
recent disasters there.

This company could easily move 51% higher (at least) as earnings jump
higher because unlike many chipmakers, this company has a limited
manufacturing presence in earthquake affected areas in Japan, meaning it
can take up the slack from stalled output from other chipmakers more
directly affected by the earthquake.