The debt deal in Congress is as good as passed. And yet stocks sold off hard yesterday. And today isn’t shaping up to be much better. The reason, in my opinion, has to do with government spending cuts, austerity and what that means for economic growth.

Yesterday, I asked the question "where will new demand come from?" And I recently received a reader question that hits the same theme…

You keep making comments about government spending reductions detrimentally affecting the economy on various levels. Would you please expand on this some in a future newsletter. I am inclined to disagree but am trying to keep an open mind. Without a tempered and relatively detailed explanation of your thoughts in this regard, it becomes difficult to distinguish it from what many of us see as the stupid, blind, fear-mongering rhetoric we hear not only from the White House, but also most of the media.

Well, clearly, with high unemployment, consumer demand and spending is lower as people have less money in their pocket. A recent editorial from The New York Times columnist David Leonhardt says this about job cuts due to reduced spending (austerity) at the state and local level:

He even provided a nice chart to show us the difference: 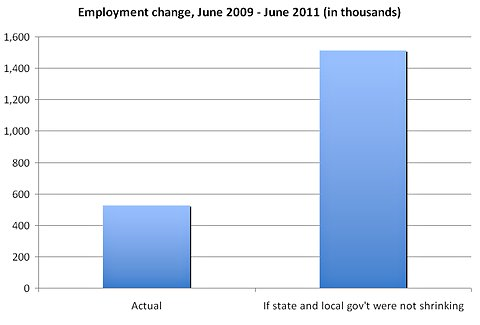 It’s logical that government would cut jobs, or hire less, as it cuts spending. Anecdotal evidence bears this out. Some other interesting statistics from the NonFarm Payroll report from July 8: the "labor force participation rate", or the number of adults working or looking for work, is 64.1%, the lowest level since 1983.

The average unemployed person has been out of work for 9 months, the average work week is 34.3 hours and average pay was down a penny to $22.99 an hour.

These are not good statistics for job growth. They show that companies are having no trouble meeting current demand with the current workforce. As I’ve said, there is no incentive for companies to hire, and the observation that companies have not hired due to uncertainty about policy doesn’t wash.

Add it up, that’s about 2 full points of GDP growth lost because of cuts in government spending over the last three quarters. This is why 2Q GDP growth came in at 1.3% and 1Q GDP growth was revised down from 1.9% to 0.4%.

U.S. economic growth is anemic, at best. And the debt deal isn’t going to help. Economists form JP Morgan (NYSE:JPM) and Deutsche Bank say that spending cuts will cost 1.5% in GDP growth in 2012.

Zack’s also reports that 64% of government spending is defense spending. 32% is Medicaid and Social Security. You can draw your own conclusions here.


I think we all agree that current levels of government spending are not sustainable. But let’s not totally ignore the fact that government payrolls have been an important contributor to overall employment and GDP growth.

I will readily admit that I don’t have the answers to how we fix this situation. The U.S. overspent for years, and now we have to deal with that reality, on both a government level and a personal level.

And I will also say that much of the government stimulus money and bailout spending was not directed to areas that would truly help long-term growth.

But I do know that we can’t rely on Corporate America to suddenly go on a hiring binge. And so, it would seem that we will be in a high-unemployment, slow growth path for some time.


It is worthwhile to wonder what could boost jobs growth, with no assistance from government spending. Manufacturing could be one area of job growth if companies choose to return manufacturing operations to the U.S. from overseas.

Costs in China are rising, and there is some movement on this, this article from Reuters offers some anecdotal evidence of this trend.

I doubt anyone wants to hear this right now, but there is one source of liquidity that has not been handcuffed. The Fed.

Bernanke and Co. have clearly stated that they stand at the ready with more stimulus if GDP and job growth lags.

It’s pretty much a foregone conclusion that GDP and job growth will lag. So we might infer that more Fed action is coming. Like it or not, don’t forget what happened the last time the Fed acted with QE2 — the stock market rallied for 8 months virtually uninterrupted.

Seats are going fast for the FREE TradeMaster instructional video: "The 5-Minute a Day Investment Plan." So if you’d like to learn how can make thousands in extra income a month, while working only a few minutes a day, you should sign up.

Trading guru Jason Cimpl will show you how you can turn stock price movement into steady reliable income.

You’ll get the easy-to-use tools you need to effortlessly earn thousands a month in the latest FREE TradeMaster instructional video: "The 5-Minute a Day Investment Plan."

Write me anytime at [email protected].