So, let me start today by offering my apologies if you had difficulty getting Daily Profit or any of our other letters yesterday. The Wyatt Investment Research offices in Vermont were inaccessible. Here’s a photo tweeted by WPTZ NewsChannel 5’s Jill Glavan yesterday: 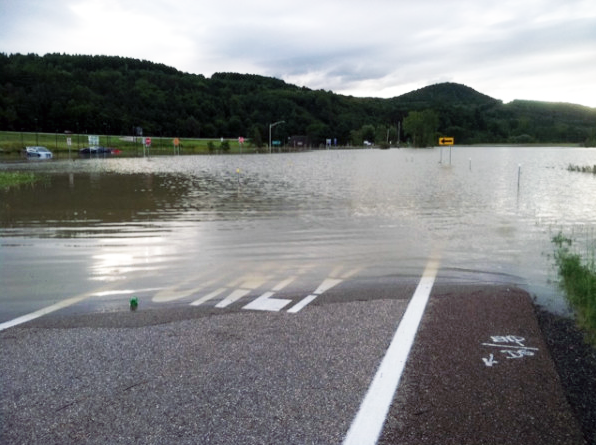 That’s exit 11 off highway I-89 to Richmond, Vermont. We’re used to getting around on skis, snowshoes and snowmobiles. But boats? Not so much.

I’m grateful that none of my staff suffered any major damage or injury, and I certainly hope Daily Profit readers were spared anything more than inconvenience.

Now, let’s get back to business.

I asked my colleague over at TradeMaster, Jason Cimpl, for his take on the recent stock market action. From his TradeMaster morning alert:

"I noted, over the past few weeks, the clear bottoming pattern and institutional buying activity that occurred near 1115 SPX price support. I cautioned against shorts at that level and believed we would get another rally to 1197 or higher.

Clearly we got the "higher" but as I alluded to in the morning email I can’t be sure why SPX continues to rally. The fundamentals of a slow growth economy and lack of confidence in the government took U.S. indices lower earlier this August. And that hasn’t changed.

Yet the way the market has rallied over the past few days resembles a bull market. In fact, ignoring the fundamentals of the economy and focusing only on the chart setup, yesterday’s break out past 1197 set up a move that would target 1262 before any significant (3-5 days) consolidation. But why?

The FOMC minutes will be released later today. I think there might be some speculation that Bennie and the Feds are more prepared to offer the market freebies quicker than their speech at Jackson Hole implied. And I think there is good reason to believe the FOMC minutes later today will hint (to a greater degree than the speech) that easing is forthcoming.

Bennie and the Feds did not offer the public very much information last week. In fact, they basically said "Mr. President it’s your turn to tackle the economy." But they did say that their September meeting on the 21st would be expanded by one day.

While one day does not seem like a great deal of information, that minor detail may be what is driving the market this morning. The Fed gathers 8 times a year. Sometimes those meetings are one day, and sometimes they are two days.

But, in the past, when ever big policy changes are announced, QE, raise rates, cut rates, anything major; policy moves like that typically will follow a two day meeting. Because Bennie and the Feds decided to expand the September meeting, it could signal that the Fed may take a more aggressive strategy towards the economy in a few weeks – and today’s FOMC minutes might reveal just what that strategy could be.

For growth to accelerate, there needs to be stimulus from somewhere. The president will be announcing a jobs bill sometime in the next week or two. I wouldn’t be surprised if the Fed chooses to act in tandem with such fiscal stimulus.

In fact, one could argue that monetary stimulus alone (QE2, QE3, etc) is doomed to fail because it does not create demand. But combined with fiscal stimulus, which would put money in people’s pockets and thereby create demand, Fed actions could actually be productive.

Personally, I’d as soon see the Fed stand down for a while, but that’s been the Fed’s modus operandi since 2008.