It’s not often that I find myself agreeing with anything Goldman Sachs (NYSE: GS) says. 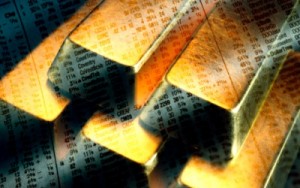 But earlier this month, a report from the investment bank said, “We would view a gold sell-off substantially below $1,250 as a strategic buying opportunity.”

I would go even further than Goldman and consider it a gift from the investment “gods” if gold goes much below its current level of around $1,260 an ounce.

My view is the recent sell-off in gold is, to quote a title of a Shakespeare play, “Much Ado About Nothing.”

Much of the current weakness in gold can be directly attributed to investors believing in a popular Wall Street myth. That myth is that rising interest rates are bad news for gold prices.

First off, what will the uber-dovish Janet Yellen do? Raise rates by her annual quarter-percent in December?

Let’s ignore my thoughts about the Fed though and just look at history.

And last July, HSBC (NYSE: HSBC) published research showing that the price of gold actually increased after the previous four Fed interest rate hikes. And now, with the hike last December and the subsequent rise in gold, we can make that five.

In other words, a rise in rates from these ultra-low levels will not make gold prices go down, myth notwithstanding.

A Look at Gold Fundamentals

Instead, gold will be pushed higher in price by other factors.

For starters, the gold market is in a far different place than say the oil market. The capital expenditure slashing cycle is still in the early innings with oil. In fact, U.S. oil production is starting to rise again.

But deep cuts in capital expenditures have been underway for years in the gold industry.

That translates to “peak gold” production, at least for this cycle. Forecasts from Thomson Reuters GFMS and others are that gold output from mines will actually decline by 3% in 2016.

This trend will continue for the foreseeable future. Speaking to the Financial Times earlier this year, the CEO of Russian gold miner Polymetal (OTC: AUCOY), Vitaly Nesis, said “I think supply will drop by 15 to 20 percent over the next three to four years.”

The president of Barrick Gold (NYSE: ABX), Kelvin Dushinsky agrees. He also spoke to to the Financial Times earlier this year: “Falling grades and production levels, a lack of new discoveries, and extended project development timelines are bullish for the medium and long-term gold price outlook.” Barrick is the world’s biggest miner of the yellow metal.

Very long-term, the outlook may be extremely bullish. In 2015, Goldman Sachs analyst Eugene King estimated that there are only “20 years of known mineable reserves of gold [left].”

Canada Misses the Mark on Gold

The final factor is more psychological.

Gold investors’ remember back to the turn of the century. When the Bank of England sold more than half of its gold reserves between 1999 and 2002, it marked the start of gold’s bull run. Since 2000, gold is up about 350%. That outpaces the S&P 500’s return of about 108% with dividends reinvested.

Several months we saw a similar move from the Bank of Canada. The official report issued on Feb. 23, 2016, showed Canada’s gold reserves at zero.

The Bank of Canada said in a statement it was diversifying its portfolio “by selling physical commodities (such as gold) and instead investing in financial assets that are easily tradeable and that have deep markets of buyers and sellers.”

That statement is so wrong is so many ways. Gold is not a commodity – it’s a currency and one that has been around for centuries. But that’s a story for another day.

As a contrarian, I join with the gold traders that call it the “Poloz’s Bottom,” in honor of the Bank of Canada’s Governor Stephen Poloz.

How to Buy Gold Now

With both fundamental and other factors lining up positively for gold, how should investors play it?

If you want to actually own physical gold long-term, a good choice is the Merk Gold Trust (NYSE: OUNZ). By simply filling out a form with your broker, you can convert your holdings in OUNZ into gold bullion or coins.

And it is safer than buying an individual gold mining company.

That’s because all Franco-Nevada does is provide funding, for projects it has done its due diligence on, to miners in exchange for royalties on future metals production. It’s probably the reason FNV has no long-term debt.

Despite its very conservative business model, Franco-Nevada’s stock outperformed both gold and the S&P/TSX global gold mining index since 2008. And it is a dividend champion, having raised its annual payout eight years in a row!

For investors banking on the “Poloz bottom,” these two choices will do nicely.