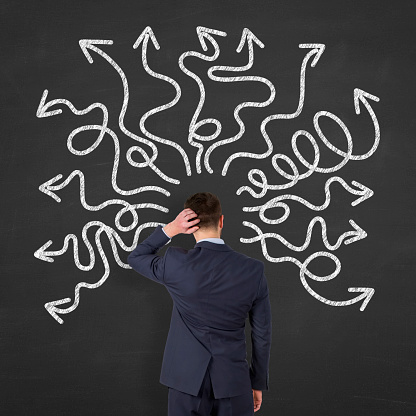 Of course, it’s A . . . right? The economists are the geniuses, after all. I mean, they wrote the Black-Scholes options pricing model  ̶  the pricing model that every options trader uses directly or indirectly on a daily basis.

But if you’ve ever read the book When Genius Failed, you would quickly realize that the smartest people in the room are not necessarily the best traders. In short, the two Nobel Prize-winning economists  ̶  Myron Scholes and Robert Merton  ̶  lost $4.7 billion in four months of trading. That’s billion . . . with a “B.”

And while they were losing money, the trader who views the market as one big poker game was making billions . . . also with a “B.”

His name is Jeff Yass and he runs the most successful options trading firm in the world: Susquehanna Investment Group.

Discover HOW to start trading like a PRO! You don’t need a Ph.D. in mathematics from Harvard.

A Billionaire’s Trading Strategy and Poker

Every options and poker professional will tell you the same thing: the longer you play with a negative edge, the greater the probability of eventual financial ruin. Probably the most basic requirement for successful trading is that you must have some well-defined method  ̶  a specific approach  ̶  that gives you a statistical edge.

Without such a method or edge, you will eventually lose, because the odds are 50/50 before transaction costs.

This is exactly why I trade iron condors. It gives me a defined edge. The risk is defined on each and every trade. And it allows me to choose my own probability of success.

Why do iron condors give me statistical edge?

Professional poker players are known to seek out “soft” or “weak” tables as a source of income. This means that the more inexperienced players there are at the table, the easier it will be for the seasoned pro to take their money.

It’s no different in the world of options, particularly when using trading strategies with a statistical edge like credit spreads.

Finding the consistent loser or novice trader is how the option pro generates the bulk of his or her gains. When I trade credit spreads, I take advantage of the speculation of others, typically newbies who are buying out-of-the-money calls or puts with the hope that they will eventually move into the money.

In poker, the person who shows too much emotion or doesn’t truly understand the game will be cleaned out in short order.

In options trading, everything is laid out in the options chain, a list of option characteristics at different strike prices. By looking at the “probability of expiring”  ̶  the chance that a stock or ETF will close above (for calls) or below (for puts) the chosen strike price  ̶  the options trader can make decisions based on the speculation of others. But unlike poker, the participants show their hands when trading credit spreads.

This is THE advantage that credit spreads (iron condors, vertical spreads, etc.) offer over any game or investment vehicle out there.

For instance, with the Nasdaq 100 (QQQ) trading around $174, some traders are making wagers that QQQ will move above $181 at July options expiration in 42 days.

The chance of that happening is 16.57%, as shown in the Prob.ITM column above (probability of closing in-the-money).

What about traders who think QQQ will push above $182 at July options expiration? The chance of that happening is 13.17%.

What about if a decline occurs? Some traders are making wagers that QQQ will move below $163 at July options expiration in 42 days.

The chance of that happening is 16.92%, as shown in the Prob.ITM column above (probability of closing in-the-money).

With those types of odds, smart investors should take the other side of the trade.

I can form a range-bound strategy known as an iron condor based on these  probabilities.

This is the logic behind this billionaire’s trading strategy.  It’s why Jeff Yass is a billionaire with one of the most successful options trading firms in the business. He understands probabilities.

The so-called geniuses might have the formula, but without a strategy with a statistical edge you are just another trader playing a zero-sum game. Unfortunately, that is why so many people fail at trading options and stocks. They don’t understand options probabilities and the true statistical edge provided them by the market.