For those gold bugs out there, I have a different way to approach investing/trading in gold.

The strategy for trading in gold is a twist on the standard poor man’s covered call strategy. The twist is this: Rather than buying one LEAPS contract and selling one near-term contract against the LEAPS, this approach buys two LEAPS.

The 2-1 ratio allows us to benefit from any spikes while simultaneously allowing us to hedge our position and lower our overall cost basis while we wait for that bullish spike to occur.

I’m going to use the Vaneck Vectors Gold Miners (NYSEArca: GDX) for our example in trading in gold.

The ETF exemplifies the main characteristic that I look for when using a poor man’s covered-call strategy . . . liquidity.

The first step is to choose an appropriate LEAPS contract to replace buying 100 shares of GDX.

But we can enter a position for far less capital, while having the potential for greater upside and less exposure to the downside.

If we look at GDX’s option chain, we will quickly notice that the expiration cycle with the longest duration is the January 2023 cycle, which has roughly 665 days left until expiration. 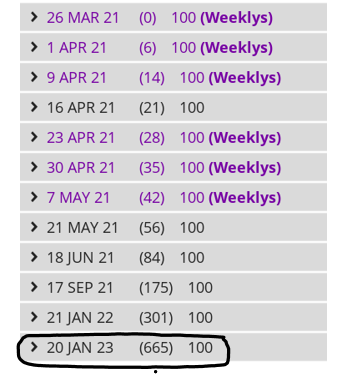 The next step is to sell an out-of-the-money call against our two LEAPS contracts.

Our total outlay or risk now stands at $1,865. At first, the premium seems small, but on a percentage basis selling the 34.5 call premium for $75 reaps a return on capital of 3.9% over 56 days. So, we could potentially bring in 23.4% in premium by just selling one call against our two LEAPS contracts.

But remember, because we purchased two LEAPS, we can participate in any continued upside move in GDX. This will increase your deltas and allow half of your position to participate in a move past $34.50.

Typically, this approach makes anywhere from three to five times more than the underlying stock or ETF . . . and is a great way to add some bullish exposure with far lower capital.

The best part is that we can continue to sell calls against our LEAPS contracts every month or so to lower the total capital outlay. But remember, options have a limited life, so when we get closer to the LEAPS contract’s expiration, we will simply sell the contract and use the proceeds to continue our poor man’s covered-call strategy.