If you don't understand what the bear is, what it wants or how it gets what it wants, you will get eaten by the bear.

Most people think bear markets are periods where the stock market declines.

But that's not even close to the truth.

Bear markets are punctuated singularly by long periods where stocks move up and down but ultimately end up exactly where they started.

And looking at an index of the 500 largest publicly traded companies in the NYSE, it's pretty clear that we're in a 13 year bear market.

We can all look at this chart and immediately understand that we're in a bear market. But the bear is tricky. Three times over the course of this bear market, we all watched the market rally spectacularly.

So the bear continually tricks investors into piling into stocks when they're on the rise only to drop them like a rock to new lows shortly after the rally really looks like it's legitimate.

And most people don't know it, but the BIGGEST stock market rallies always occur during bear markets. Pretty amazing.

The bear eats most investors during these periods. It tricks them into entering near the highs, and then slaughters them with new lows.

And every time new lows get hit, it's to the total shock and dismay of the mainstream financial media – who are ALWAYS notoriously bullish. The last crisis was always unforeseen.

They'll similarly blame the recession of 2008-2009 on the unforeseen events of the mortgage crisis.

Never mind that both of these crisis catalysts also coincidentally occurred at or near the stock market highs of the decade.

These types of events always seem to come out of nowhere and to make the talking heads look like the victims of bad luck. But the real problem of course is that most of the folks on CNBC and in the pages of the Wall Street Journal are simply market cheerleaders who happen to get most excited about stocks when they're at or near their highs.

But you need to understand that we're in a bear market for stocks. I can't say how long it will last. I can say that the bear markets of the last 120 years have lasted between 10 and 22 years.

You also need to understand that the bear market has a tendency to wipe out most investors – so if you're going to buy a broad index during a bear market, you should only really consider doing so when stocks have fallen between 30% and 50% from their highs.

In the meantime, while we wait for the bear to continue devouring stock investors, we also know that commodities tend to outperform.

Even with some of the big swings we've seen in commodities, most commodities are higher in price than they were 13 years ago.

I'll use oil, gold and wheat as proxies for some of the main categories of commodities. 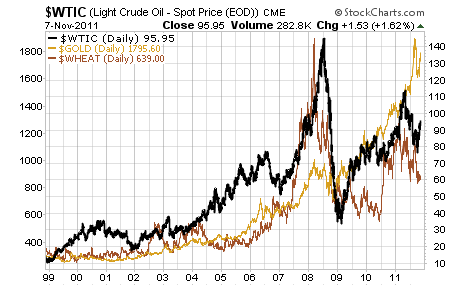 All three are up significantly over the past 13 years – even though wheat and oil are off their highs.

We're in a bull market for commodities. This information should lead us to the conclusion that we should continue to invest in commodities.

Until and unless the headwinds hurting stocks and the tail winds assisting commodities reverse course, we should keep our stock exposure limited, and our commodity exposure healthy.

Ride the bull. Stay away from the bear.