Think of gold as a weathervane for the world’s currencies.

Under still conditions, a weathervane does nothing. It provides no information. It just sits there.

But when it gets windy, a weathervane points to whatever direction the wind is coming from. The weathervane itself, however, remains the same – no matter which way the wind blows.

Gold (like the weathervane) does NOT change in value. It’s the same, no matter what happens.

That may seem impossible – but it’s true for one simple reason: the world’s supply of gold is relatively static. Meaning, it stays about the same. That’s because very little gold is consumed in industry every year. Most gold ever mined still exists – sitting in the form of coins, bars, and jewelry. It’s not in a landfill. It’s not burned up in the atmosphere.

And though there is more gold in existence this year than there was last year – it’s not much more. The world’s supply of gold generally grows at about the same rate as the world’s population. So on a per capita basis, the gold supply is relatively flat.

For that reason, the supply side of the supply and demand function gets stripped away. All we’re left with is demand as the main price catalyst.

And demand tends to rise when people see their currency holdings begin to lose their value.

So when the currency market gets blustery, gold tells us what’s going on. It’s still the same old gold – but it points our attention to what’s happening with the world’s currencies.

Don’t believe me? That’s fine. But look at this chart plotting gold against the U.S. dollar index: 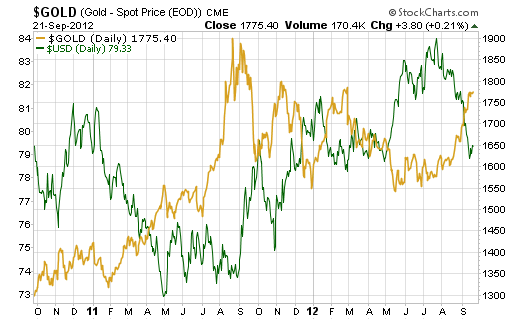 Isn’t it strange that gold seems to rise when the dollar falls, and vice-versa?

Just like a weathervane, gold shows us what direction the wind is blowing.

Here’s to knowing which way things are headed.