The shocking news that the Federal Reserve might start slowing down its money printing presses sparked a small selloff in stocks.

The 3.6% drop in the S&P 500 may have you considering your options. It’s natural to be getting a bit uneasy, and thinking now is the time to start selling and locking in the big gains you’ve earned in recent years.

Selling stocks today would be like leaving a baseball game at the 7th inning stretch when your team is down one run. The game is still being played, and the rules haven’t changed.

What did change were Bernanke’s recent comments that the Fed could slow down its purchases of bonds – specifically U.S. Treasuries and mortgage securities.

Today, I’m going to tell you why I’m looking forward to the day when the Fed decides to raise interest rates.  And why the end of quantitative easing is good news for long-term investors.

Today we are currently in a unique “win-win” situation. There are two possible scenarios, both of which are bullish for stocks.

The first scenario is that the Fed keeps QE3 running full tilt.

If the economic recovery is too slow, the Fed will be right there, buying bonds to keep interest rates as low as possible. This makes money cheap to borrow, and stimulates economic activity.

We know that Ben Bernanke and the Federal Reserve will buoy the stock market at all costs for years to come. They’ve done so since 2009, and have no intention of changing their course.

The last thing that Bernanke will allow is a stock market crash.  He knows that he can avoid this by keeping the Fed printing presses running 24 hours a day.  And that’s why he’s buying $85 billion in bonds a month.

We all owe the Fed gratitude for the profits these last four years. However, having them pump up stock prices isn’t good long-term. Eventually the market has to stand up on its own two feet.

Which brings me to the second scenario we’re likely to see:

The Fed scales back on QE3 and allows interest rates to move up slightly.

I know they won’t decided to raise interest rates until the economy begins dramatically improving.  When rates rise, it will only be because the Fed sees an improving U.S. economy.

The best thing for the stock market is a robust economy with healthy GDP growth, low unemployment, increasing wages, and rising home prices.

The good news is that this is actually happening today. And I’m thrilled.

Thanks to a 11% rebound in housing prices and a stock market at record highs, household wealth is at a record high. In fact, American’s have recouped all losses from the Great Recession. The jobs front is positive as well, with unemployment down from 10% in 2009 to 7.6%.

Not only that, but corporate profit margins are healthier than ever. According to Merrill Lynch, S&P 500 profits have been on the rise – largely since the beginning of the Fed’s “Great Easing” period beginning in the early 1990s. 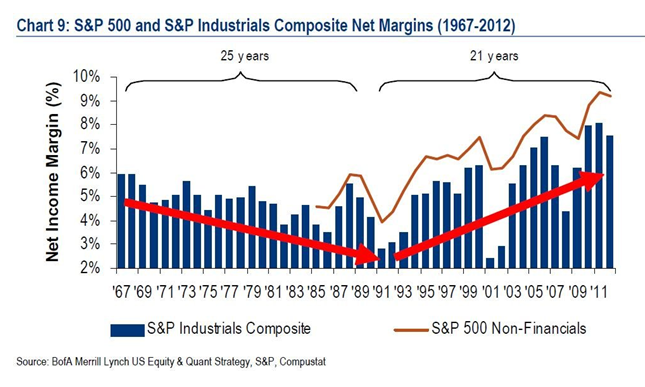 I believe these record profits are part and parcel with Fed policies. Low interest rates generally benefit strong companies – who can borrow low to grow their businesses.

Right or wrong, the effect of easy-money policy is undeniable: the American stock market is alive, well and charging higher.

Listen, I know that 0% interest rates are unsustainable.  They’re not here to stay.

And the same is true of the Fed’s monetary policy.

The Fed will roll back its efforts at some point soon. Whether the slowdown starts at the June Fed meeting or one year from now doesn’t really matter. In the mean time, I’ll stick with my dividend paying stocks.