The collapse in the price of gold last week seems to have trapped gold miners like a crumbling mine shaft.
As if rising costs and waning investor support wasn’t enough, gold’s violent retreat wreaked havoc on an already beaten and battered industry.
Just like during (and after) most catastrophes, the miners are going to need a breather before they’ll embark on a sustained recovery. Investors should treat them like the wounded companies that they are. Monitor, but don’t buy just yet.
This hasn’t been an easy market to read. After all, based on historical valuation trends gold miners have looked attractive for some time now – that is if you can get past their charts, which are among the ugliest in the market. Witness the chart of the Junior Gold Miners ETF (NYSE:GDXJ) below, which has fallen 67% from its 2011 high.

Many newsletter editors, yours truly included, have been pulled into the market over the past year by the “deep values” represented by cheap shares. All things considered, these investments haven’t worked out well.
Up until last week we had four mining-related trades booked in my Pay Dirt advisory service with an average loss of 0.17% … basically breaking even, which under the circumstances isn’t bad at all. We stepped aside from Banro (NYSE:BAA) and the Junior Gold Miners ETF (NYSE:GDXJ) at a loss, and cashed out of Silver Wheaton (NYSE:SLW) and Franco-Nevada (NYSE:FNV) while we still had double digit gains in those stocks.
Since we’ve sold all of these holdings, they are down 50%, 26%, 30% and 33%, respectively – abysmal performance that I’m happy to have missed.
If the last two years has proven anything, it has once again shown that prices can fall, fall and fall further still – well beyond any level that seems reasonable.
I’ve put up this chart before … it shows the relative performance of gold and gold mining stocks as measured by the Philadelphia Gold and Silver Index (XAU). The chart shows how many units of XAU an ounce of gold can buy. 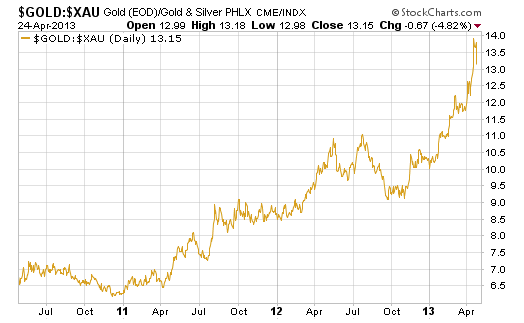 In late 2012, the 20-year trailing average of this ratio was around 5, meaning at that time gold mining stocks looked pretty attractive. When the ratio reached 9 they looked delicious, and when it reached 11 mining stocks looked liked a sure bet.
Now at 13.8, they look downright frightening.
There are times to be a contrarian and times to go with the flow. Right now I’m in the latter camp.
I’m dubious that the current “dead cat bounce” in gold will quickly turn into a sustained rally – which is what’s needed for investors to pile back into gold and gold miners.
I think it’s more likely that investors are spooked and realize there are plenty of other places to invest, particularly if they subscribe to the theory (and mounting evidence) that economic growth is likely to pick up in the back half of the year.
While I love a great mining story as much as the next investor, it’s hard to argue that one should bypass what’s working to buy what’s not. Right now gold miners are clearly not working.
Yes that will change, and yes at some point there will be 100% gains made in a few short months. But I’m dubious that a group that is so badly injured will be able to surmount a sustained recovery without taking ample time to heal.
Last week I sent out more feelers … reaching out to other analysts and getting their thoughts on the gold market and on their favorite gold stocks. I want to increase the quantity and quality of mining stock ideas and research flowing to my desk.
My promise to you is that I will review as much of the incoming material as is reasonably possible so that if and when there is a time to buy gold and silver miners, we aren’t left behind.
Until then, let’s give the miners time to heal.
Good Investing,
Tyler Laundon, MBA
Analyst, Small Cap Investor PRO
Editor, Pay Dirt