I recently returned from a huge metals and mining conference in Toronto hosted by the Prospectors and Developers Association of Canada (PDAC). I go to these conferences to find the five out of 100 stocks that we can make us some serious money.

But today I'm not talking about mining stocks. Not that I don't have great mining related ideas – I do.

Today I want to piggy-back on something Rick Rule said during his presentation. Rick is one of the most respected and successful (and most frequently quoted) resource investors around.

He stated that while he sees a lot of value in mining stocks, many sub-$500 million market cap oil and gas stocks are "stupidly cheap."

I think he nailed it here. Advances in drill technology coupled with newly discovered shale oil and gas plays has created a near perfect situation for North American energy production. This booming industry has the potential to help lead America's growth this decade.

Yet I don't think many Americans are aware of the full potential quite yet. It's time to tune in.

Such states as North Dakota, Montana, Nebraska and Colorado host formations that have become dependable producers of crude oil and natural gas.

Another up-and-coming region making headlines is the little Bakken – or so called "NeoBakken" – because of its potential. This region hosts the Niobrara shale formation in Colorado, Wyoming, Nebraska and Kansas. The area is in the Denver-Julesburg Basin, usually referred to as the D-J Basin. 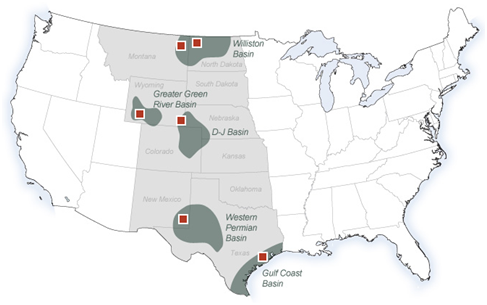 To get Niobrara exposure investors can purchase shares of Samson Oil and Gas Ltd. (NYSEAMEX: SSN), a small Australian company that has exposure to the D-J basin, as well as exposure to the other major shale oil plays in the U.S.

Samson is headquartered in Perth, but its U.S. operations are based in Colorado. Shares of the 31-year-old company are also traded on the Australian Stock Exchange for investors who wish to diversify out of U.S. dollars.

The company has a market cap of $227 million and entered the U.S. in late 2004 after becoming enamored with the Niobrara. In 2006, the company acquired a half-interest in 100,000 acres in Wyoming's Goshen County.

The stock had a nice run in 2010 yet pulled back after the initial excitement subsided. Now, with a 10% year-to-date surge in oil prices and a recent operations update – which propelled the shares up nearly 50% – this stock looks very interesting.

Note the recent pullback and the pending intersection of the 50-day and 200-day moving averages, a bullish technical sign. 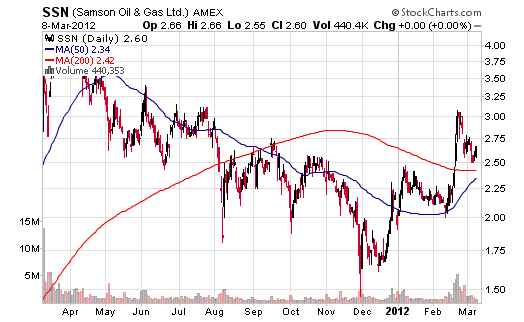 Samson is a small player by comparison, but its wells have recently begun to show promise, producing 315 barrels of oil equivalent per day (BOEPD) in the fourth quarter of 2011.

A few days ago it announced that its Montana "Australia" well produced 70 BOPD over a three-day initial test period. It expects the flow to increase significantly after it finishes preparing the well for full-scale production.

Samson is a compelling small-cap name with significant upside. The company is debt free, has proven reserves as of the end of 2011 of 650 million barrels oil equivalent and is the operator on three of its four projects – all of which are in the U.S.

It also has a very low cost of land acquisition – between $50 and $500 per acre, depending on the location.

While the stock shows the typically volatility of many junior energy exploration and production stocks, don't let that scare you away. The trick is to buy shares of these stocks on days of extreme weakness when there is no company-specific news that is driving the stock down, and then scale in with multiple purchases.

Samson has a stream of new projects coming online, and has multi-bagger return potential based on the economics I've reviewed. As always, though, please do your own research.

For those interested in more small-cap oil producers, I recently put together a research report on companies in the Bakken – you can sign up for a trial subscription here and get the report. So far, two of the stocks in this report are posting gains of 30% and 13% over just a couple of months.

I'll be back with mining-related ideas from the PDAC next week. Until then, enjoy your weekend.