After all, inflation is back. Recent Consumer Price Index and Producer Price Index readings show that inflation has accelerated into the 2.2% range favored by the Fed. Bernanke’s deflation-phobia is becoming less and less realistic.

QE2 and other stimulus measures succeeded in putting a lot of cash on bank balance sheets. Despite the recent fear that Bank of America (NYSE:BAC) needs to raise cash, the banks have plenty of it. Unfortunately, regulations are restricting banks’ use of that cash. And the banks are being stingy with loans. Without a little velocity of money, conditions can feel deflationary.

It’s ironic that one of the dual mandates on the Fed is to promote employment. Not sure how the Fed’s supposed to do that. I mean, I understand that low rates makes money for investment cheaper, and hence demand can be pushed higher. But that will only work in an environment of moderate unemployment. We have high levels of structural unemployment that can’t improve until the housing market corrects.

Basically, the Fed has done what it can do. It’s up to Congress and the administration to do the right thing. Pray for us….

President Obama has been in office for 2 ½ years, and he’s only now actively seeking a jobs bill. Better late than never? Not in my mind. Raising unemployment benefits umpteen times is not a solution, it’s a band-aid. Where would unemployment levels be if those benefits came in the form of job re-training? Would the U.S. workforce be more aligned with current needs? We’ll never know.

Newfound austerity is costing jobs at the state and federal level. The federal government has demonstrated that it’s not up to the task of spending smartly and tackling deficits at the same time. Spend blindly? Cut spending blindly? It should be clear that the best solution is somewhere in the middle.

I don’t know if Bernanke is the one to tell it straight. He’s been reluctant to point the finger at government, even when debt default was in the table in Congress.

Still, we can hope…

Maybe I was sucked by the fear the fear-mongering surrounding Bank of America. But I’ve been adamant that Citi (NYSE:C) was undervalued and attractive for the past couple of weeks as it fell below $30.

I’ll take the news that Warren Buffett bought $5 billion in Bank of America, and the consequent 10% jump in Citi, as vindication of my stance.

Buffett’s a pretty smart guy. And $5 billion is a drop in the Berkshire-Hathaway bucket. But I don’t know many investors who get more bang for the investment buck.

Buffett is well aware that a healthy economy is good for his investments. And so he knows that acting on behalf of the economy is also acting on his own behalf. His $5 billion says more about Bank of America and the banking sector’s health than any analyst comments or other investor’s money. Well played, sir.

You’ve probably read that Apple (NASDAQ:AAPL) CEO Steve Jobs is stepping down. The financial media is of one voice on this: don’t worry, buy Apple. 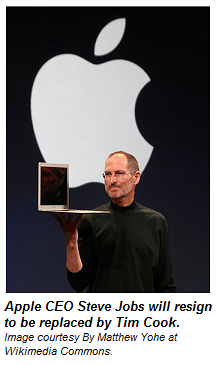 I don’t recommend selling out of Apple if you own it. The stock is cheap at current valuations. Still, I can’t help wondering why it remains so cheap. Actually I have a theory: it’s the biggest company in the world, and it can’t keep growing 30%-40% a year.

Steve Jobs is a visionary, a genius. There aren’t very many entrepreneurs who can so consistently keep their fingers on the pulse of the consumer for as long as Apple has. And now that Apple is losing its visionary, I find it hard to imagine that they can keep the run of wildly successful product launches going.