Over the past week or so, United States Treasury
Bonds put in a major reversal. I’ve been waiting for this type of movement
in Treasuries for the last few years. I’ve recommended shorting Treasury
Bonds several times over the last year. And I believe this one single trade
could be one of the most profitable investments you can make over the next
5 years or longer.

It’s one of the most important trends in the market, and like all big
trends, it should be obvious and clear to anyone paying attention: the US
Treasury market is in one of the biggest bubbles in the history of the
world.

Waiting for Treasury Bonds to crash has been like waiting for the world’s
largest ship to come into port. Even when you can see it getting close, it
could still be very far away.

So even though five year Treasury yields just experienced their biggest
gains in over 20 years, it could still be some time before our ship truly
comes in. 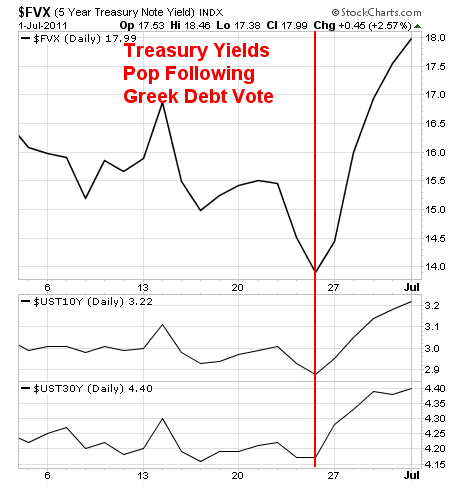 For a re-cap on bonds – when the yield rises, the price necessarily falls.
You can see this phenomena in action in the chart below which shows both
the 30 year Treasury bond prices (in blue) AND the 30 Year Treasury yield
(in red). 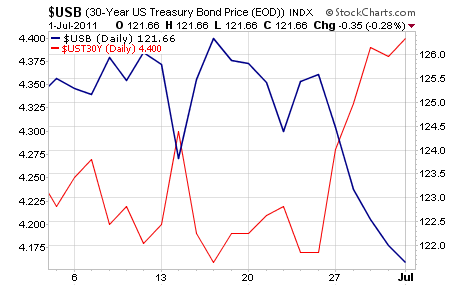 In order to profit from the eventual and inevitable crash of Treasury
Bonds, you can buy a few different investments.

There are a variety of ETFs that go short (or double/triple) short Treasury
bonds of different maturities.

One is the ProShares UltraShort 7-10 Year Treasury (NYSE:
PST). This ETF is a double-leveraged play that shorts Treasuries
with maturities between 7 and 10 years out.

The idea is that for every 1% that Treasury bonds fall, this ETF should
gain 2%.

Another ETF you might want to look at is the ProShares UltraShort
20+ Year Treasury (NYSE: TBT).

It’s the same basic idea as the 7-10 year fund – but it focuses on
Treasuries maturing 20+ years out.

I’m not an expert on bond trading, but my instinct is to focus on longer
term bonds as a shorting target, just because the Federal Reserve has shown
a preference to prop up short term bonds. Longer term bonds will
necessarily have to rise much higher than shorter term bonds.

Whenever you buy one of these ETFs – or any mutual fund or money market
product, you should first seek out not the price or how you can buy it, but
you should FIRST look at the expense ratio. For the two aforementioned
ETFs, you’ll pay 0.95% annually. That’s regardless of whether you make
money or lose money, and you’ll be dinged that amount every year. 0.95%
isn’t that bad for an ETF, but it’s not great either.

I think you’ll make far more than 0.95% on average over the next 5-10
years, but it’s still something you should be aware of.

After all, an investment could yield 100% but if you’re paying 98% in
expenses – it’s not really worth getting excited about.

Okay, so if you’re interested in owning those ETFs, I don’t think you can
go wrong over the coming years. But there are some other concerns, and
unfortunately, they’re the very same concerns that plague the US dollar as
an asset in the first place.

I’m talking about having the US Government as a counterparty. Treasury
Bonds are a huge liability for the US Government, and in case you haven’t
been paying attention to the news over the past few years, the Government
does not play fair when it comes to liabilities.

They’ve already changed the rules when it comes to corporate bondholders in
the case of General Motors (NYSE: GM). If you don’t
remember, the United States Government actually let the United Auto Workers
union to jump in front of senior bondholders when GM was about to go
bankrupt.

So if and when it’s politically expedient to do so, there’s no stopping the
Feds from changing the rules to suit their own needs. Going short
Treasuries with these ETFs puts your money at political risk. And that’s
something you need to be aware of when you buy them – just as you need to
be aware of the expense ratio.

I don’t know how you can quantify that risk, because we’re in uncharted
territory and the fall of US Treasury Bonds is likely to push the
Government to do all kinds of wacky things. Like a gigantic beached whale
desperately thrashing in an effort to get back to the ocean, it’s best to
just leave it alone altogether. There’s a risk in trying to get your lump
of flesh from the gasping beast, and there’s no way to know what that risk
might be.

That’s why I continually, constantly advise you and everyone else I meet to
own physical gold and silver.

I can’t say what will happen to ultra-short Treasury ETFs, but if you own
gold, and you keep it close and safe, you have no counterparty risk. The
Government can’t simply decide to change the rules on precious metals in
the same way it can about it’s massive paper liabilities.

Tomorrow, the Government might proclaim that it will no longer fund its
debts. They can’t say that about precious metals.