John Paulson, the billionaire hedge fund manager, notable gold bull and famous progenitor of the "Greatest Trade Ever" (shorting mortgages between 2006-2009) recently sold 1/3 of his holdings in the SPDR Gold ETF (NYSE: GLD).

Two years ago when Paulson announced large gold purchases, many gold bulls pointed to his moves as proof-positive that gold is a good place to be.

And with Paulson selling now, I’m sure some gold holders will be questioning their own positions in gold.

Frankly, I don’t care about Paulson’s selling. I didn’t base my decision to buy gold on Paulson’s holdings, and I won’t look to Paulson as a selling indicator either.

It does however bring up what is probably the most important and frequent question I’m asked by subscribers.

"When should I sell my gold?"

The question itself is somewhat misleading. Because it’s not a question of "when," but rather, "at what price relative to other assets."

By asking, "when?" you’re falling into the trap of thinking about this investment transaction as a function of time. Everyone will tell you that timing the market is impossible.

And I agree – even with all the fundamental analysis and technical savvy in the world, you won’t ever be able to gauge the top or bottom of a bull market with any degree of sustained accuracy.

But I know what I’ll be looking to buy when I do sell: The SPDR Dow Jones Industrial Average ETF (NYSE: DIA).

At what value will I buy the DIA? Simple. When gold is close to 1:1 nominal parity with the Dow, I’ll sell most of my gold and buy DIA.

Right now, the ratio is nowhere close to parity. 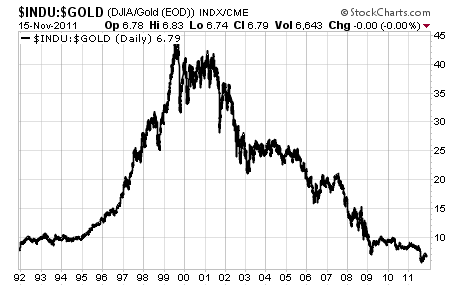 And the Dow:Gold ratio hasn’t been close to parity since the early 1980s.

But it’s inevitable that the stock market will fall. That doesn’t mean it will happen soon, and it doesn’t mean that you should panic, by any means.

But it does mean that you should be prepared.

How do you prepare?

Keep very meticulous stop losses on your stock positions. We all own stocks – even the most bearish gold and silver bugs own a few shares of Exxon (NYSE: XOM) or Microsoft (Nasdaq: MSFT). Blue chips are great places to park cash for most periods – even sustained bear markets – but they are heavily correlated to stock market panics.

I keep a 25% mental trailing stop loss on my stock positions. I don’t put these stops into the market, and I’ll monitor day and week-end closes.

Keep a close eye on those stops. Wait for the stock market to crash down, and gold to continue ramping up. Someday, they’ll be close to parity.