Everyone knows about Apple’s (Nasdaq:AAPL) tremendous growth over the past decade. The success of products such as the iPod, iPad and iPhone has given the company almost $100 billion in cash. Can we call it iCash? That seems only fitting seeing how the "i" branding has become part of the mainstream and is responsible for the mountain of money the company is sitting on.

When the late Steve Jobs was still running the show at Apple, it was pretty clear that the company would not be using the cash on hand to pay a dividend to shareholders. Mr. Jobs seemed to be against paying a dividend. He even sought the advice of Warren Buffett on what to do with all the iCash on hand. Apparently Mr. Buffett told him he had four options- do a stock buyback, pay a dividend, use it to acquire other companies or sit on it. Jobs chose to sit on his iCash.

When Steve Jobs passed away last October, the reins were passed to Tim Cook. Cook technically took over last August when Steve Jobs resigned, but Jobs was still looking over his shoulder.

So now the decision on what to do with the iCash falls to Mr. Cook and the board of directors. The possibilities of what to do remain the same – stock buyback, pay a dividend, acquisitions or sit on it. Let’s look at each scenario individually.

Stock Buyback – Thomson Reuters recently concluded a study on stock repurchase plans among stocks in the S&P 500. They concluded that most companies were unable to add value through stock buyback programs. In fact, what they may have found is a new contrarian indicator. When share buybacks as a whole are high, it could be a bearish sign for the market. Just look at the chart with the findings. 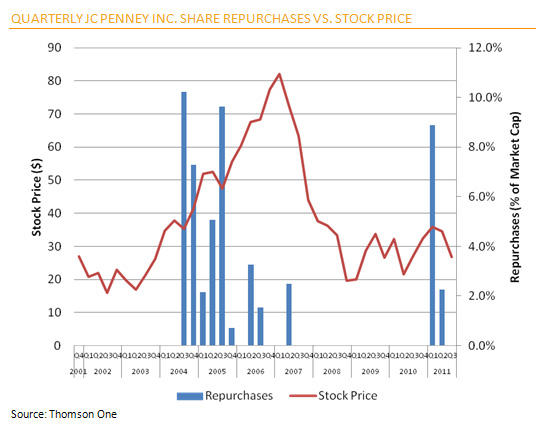 With regard to Apple directly, the idea behind a stock buyback is typically to buy the shares back because the company thinks they are undervalued at the time. Does anyone really think Apple is undervalued at $530 per share? It might be fairly valued, but undervalued might be a stretch.

Pay Dividend – Some investors hold to this crazy notion that publicly traded companies owe it to shareholders to reward them for holding their stock. What a crazy concept. One way for a company to reward its shareholders is to pay a dividend. The company can choose to pay a one-time special dividend or it can implement an ongoing quarterly dividend.

Contrarily, stocks that pay a regular dividend tend to outperform non-dividend paying stocks. A recent article from Forbes pointed out that from 1973 to 2010 growth dividend stocks returned 9.3% on average while the average return for non-dividend paying stocks averaged 1.8%. The downside to a regular dividend payment is planning for the distribution and conserving cash in order to make the payment. Some companies protect their dividends to the point that they may take cost cutting measures in order to avoid cutting their dividend.

Acquisitions – I don’t think I need to explain how acquisitions work. Unlike buybacks and dividends, it is virtually impossible to measure the success of making an acquisition due to the variables surrounding the company that was acquired.

The question for Apple is the type of company  it should acquire. They are dominant in the cell phone market already and they have used the iPad’s success to dominate the tablet market as well. One area I believe might make sense for Apple is the internet search arena. The current market cap of Yahoo! (Nasdaq:YHOO) is less than $20 billion. They could acquire Yah00, change the corporate culture to be more like that of Apple and still have $80 billion in cash left over.

One company that has been rumored to be a possible target for Apple is Sony (NYSE:SNE). The electronics giant would give Apple exposure to several new markets they are not currently involved with-televisions, DVD players, video cameras, digital cameras and video game consoles. The current market cap for Sony is $22.4 billion, leaving the company with $78 billion in its vault.

Sit on the cash – This path doesn’t need explanation either. Apple has been using this process for years and could choose to stick with it. They could use the cash on hand to invest in product development. When Steve Jobs passed away, one concern expressed by investors was whether the product ideas could keep flowing as they had when Jobs was the visionary. Apple may have to use its cash to attract a new visionary or to create a think tank to fill the void left by the passing of Steve Jobs.

My personal take is that the two best uses for the cash is to declare a quarterly dividend and/or use it for strategic acquisitions. A quarterly dividend would put the stock into a new category and could potentially cause the stock to rise as mutual funds and ETFs that are focused on income-producing stocks could send the demand for Apple shares soaring.

An acquisition makes sense if it brings Apple into a new market. Yahoo would inject Apple into the internet search market, but they would have to change Yahoo’s current culture. Sony probably makes more sense as it exposes Apple to more markets, with fewer internal problems than there are at Yahoo.