The Bakken and Marcellus shale oil formations will free America from its dependence on foreign oil, help our economy and increase employment. That’s been the message since 2008. However, according to Washington Post’s Brad Plumer, this shale oil boom hasn’t helped GDP. But I will explain later why this doesn’t change my investment attitude.
The U.S. economy has expanded roughly 7.6% since the recession ended in 2009 – far outpacing other developed GDP regions such as Great Britain, Japan and the EU. Many experts and investors assume that a large portion of that growth is a result of cheap energy thanks to the boom in North American shale oil. Plumer argues that’s not been the case.
He cribbed information from a Capital Economics report written by Paul Dales explaining how the oil boom barely added to GDP.
“Since June 2009 the volume of oil and gas extraction has risen by 24%. Over the same period the production of mining machinery has risen by 47% and the output of mining support services, which includes oil and gas drilling, has leapt by 58%.
But that rise explains only a small part of the economic recovery. Admittedly, it is responsible for a fifth of the 18.3% increase in overall industrial production. Given that the oil- and gas-related sectors account for only 2.5% of GDP, they have contributed just 0.6 percentage points to the 7.6% rise in GDP.”
The Capital Economics report shows that though the growth in oil production and ancillary industries has been outstanding, it’s a tiny piece of the U.S. economy. This industry is not yet big enough to carry GDP growth on its own.
However, the boom in shale oil influences GDP in less direct ways. For instance, GDP should have increased because the U.S. is importing less oil. A decrease in imports adds to GDP. However, oil prices have remained stubbornly high. So the decrease in total barrels imported has been largely offset by higher crude prices, meaning GDP hasn’t benefited too much from the increase in domestic oil production.
Plumer also wisely addressed the common belief that lower natural gas prices have increased spending power by decreasing material and energy costs for businesses and consumers. This is a fancy way of saying spending increases when money is saved in other areas. For example, when a utility bill is $100 less than expected, that $100 will be spent on other items, boosting GDP.
Though that line of thinking makes sense, Plumer claims that low natural gas prices have failed to help the consumer. Natural gas prices dipped 70% from 2008, whereas the price of electricity has declined by only 10%. Those savings are the equivalent to about $20 billion or a 0.2% increase to income.
He also said that from 2008 to 2011 the U.S. economy spent 23% less on utilities. Though that sounds like a huge decline, it accounted for only $70 billion, or 0.8% of wage costs. Energy-intensive industries haven’t seen a boost from lower natural gas prices. In fact, the contribution by energy intensive businesses to GDP growth has trended lower for years. 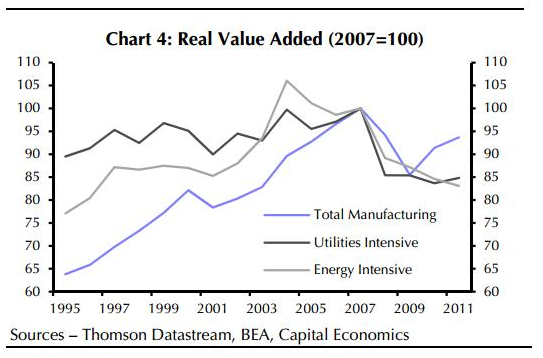 Dales concludes that the shale oil boom has contributed very little to U.S. growth, especially compared to the applause it’s given. I’d add that the natural gas boom is in the early stages, and it’s too early to call it a bust. Moreover, Dales didn’t consider 2012 growth. And when you’re looking at only a three-year period, one year really matters.
I was surprised to learn that the oil industry wasn’t helping U.S. GDP as much as I thought, but this didn’t change my investment attitude. The shale oil boom is for real, and it offers many different investment opportunities. Many investors focus on oil production companies, but that’s no longer the best investment to make because they’re too dependent on the price of oil moving higher. The transportation industry has grown like a weed thanks to the boom in shale oil production. And it shows no sign of slowing down because there aren’t pipelines that can deliver oil from the shale regions to Eastern and Southern refineries.
The absence of pipelines meant that railways had to pick up the slack, which resulted in huge demand for a very specific and necessary transportation product. And only four companies produce that product. Carl Icahn and Warren Buffett are both investors in this industry. So the investment idea has a lot of upside potential. Readers of my stock service – Top Stock Insights – recently received an in-depth report about the industry, which included two “must own” companies. Click here for more information about our latest research and stock recommendations.