I'm an inveterate value hunter.  I prefer the bargain bin over the bespoken and the dinged-and-dented over the definitive.

Not surprisingly, when I screen for stocks, I'm more attracted to issues nearer to their 52-week lows than to their 52-week highs.  Price is a natural starting point for vetting value, but it's not an ending point.  A low share price can also reflect full value, or even over value.

A recent stock screen for lagging stocks produced a number of coal-related issues.  Many of these issues are trading near their 52-week lows, and a couple are setting new lows daily. 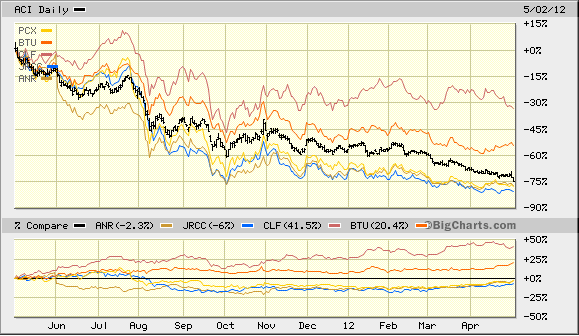 Given that so many of these coal issues trade at such steep discounts, my interest is naturally piqued.  The question is, are these issues a value or a value-trap?

There are good reasons for eschewing coal stocks, to be sure. Most coal companies are posting continually lower earnings compared to 2011 due to falling prices and falling demand. Prices for Appalachian coal are down 24% over the past 12 months. In the west, prices for coal from the Powder River Basin in Montana and Wyoming are down 45%.

Coal is the predominant fuel for electricity production.  Data from Canadian investment house Scotia McLead show that coal powered 43% of the electrical grid in the United States, while natural gas powered 24%, in 2011.  The percentages were 44% and 23%, respectively, in 2010.

The U.S. Energy Information Administration expects the trend in both fuels to continue in 2012, with coal's portion of electricity generation falling to 40% and natural gas rising to 27%.

Coal is in a struggle with cheap natural gas. With all the shale reserves unlocked by fracking, natural gas prices have steadily declined over the past four years to the point where natural gas is on par with coal on a cost-per-energy equivalent.  Today, both sources are close to $2.30 per million British thermal units (mmBTUs).  Historically, coal has held a significant price advantage per mmBTU over natural gas.

So there is obviously a lot of data to discourage coal investors.  But there are also pockets of encouragement, if investors are willing to look beyond coal's immediate obstacles.

Natural gas is cheap, but how long can natural gas prices hold today's historical lows?  ConocoPhillips (NYSE: COP) and Chesapeake Energy (NYSE: CHK) have announced significant cutbacks in natural gas production this year.  A few industry pundits I've read believe money isn't made in natural gas unless the price is above $3.50 per mmBTU.

Back in 2010, when natural gas averaged $4.25 per mmBTU, the production cost of coal-fueled electricity generation averaged approximately $33 per megawatt-hour compared to almost $49 per megawatt-hour for natural gas.  Natural gas has also historically been more volatile than coal.  Just over the past 30 days, the price of natural gas has moved from $2.10 to $1.90 to $2.35 per mmBTUs today.  That’s a 9.5% move down, followed by a 23.7% move up … in just one month!

It's also worth remembering that capital is heterogeneous, not homogenous.  This means a power plant can't just instantaneously switch to natural gas from coal.  Many analysts believe that most coal-to-gas switching has already occurred, and further switching will be much harder because of logistical constraints, such as the lack of a nearby pipeline and existing contracts.

Overseas demand for coal is also on the rise: U.S. coal exports rose 57% from 2009 through the end of 2011. New power generation in China and India could increase demand by another 300 million tons this year.

The American Coalition for Clean Coal Electricity, an industry trade group, reports that the United States has more coal reserves – 272 billion tons – than any other country in the world.  The United States consumes roughly 1.1 billion tons annually.  Unless the federal government outlaws coal production and export, world energy markets simply will not overlook such an abundant, cheap, efficient energy source.

The bottom line is that coal isn't going away; that's why I suspect that there are at least a couple of true values among the coal stocks. I wouldn't be surprised to find a stock or two that adhere to the High Yield Wealth requirement for safety, yield, and value.  I know I'll certainly be looking at coal stocks to see if that's the case.