After four days speaking with company executives at the Prospectors and Developers Association of Canada (PDAC) conference in Toronto last week, one thing is clear – many junior resource stocks are dirt cheap.

Of course every CEO believes his or her company is undervalued. But right now many of them are correct. With the long-term price of gold trending steadily higher, many mining companies have projects that are becoming more valuable with every passing month. 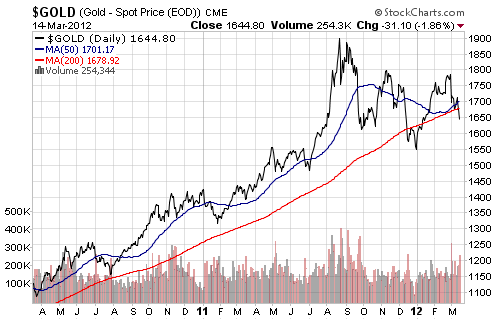 But you wouldn’t know it just by looking at share prices.

Below is a three-year chart of the S&P/TSX Venture Index (plotted below in gold, left scale), a good proxy for the junior resource sector since many of these stocks trade on the TSX Venture exchange.

The Venture Index is off more than 30% since last year’s PDAC. In contrast, all the major U.S. indices – the S&P 500 (plotted below in black, right scale), Dow, Nasdaq and Russell 2000 – are all at or near multi-year highs. 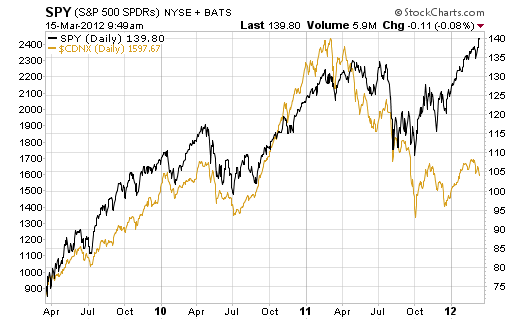 So what’s the story?

There are three potential reasons why many of these stocks haven’t benefited from the rally that has pushed most other equities higher:

1) The market isn’t convinced that $1,700 gold and $34 silver will last.
2) Investors believe inflation in the mining sector (labor, equipment, fuel) will hurt growth.
3) Money just hasn’t yet found its way to this relatively speculative corner of the market.

I believe all three hold some truth, but I’m most convinced that it’s the last point that is the biggest hurdle to overcome right now.

But it’s the easiest to overcome. At some point investors are going to come around and realize that quality juniors are deeply undervalued.

Many mining projects that I’ve studied are worth far more than they used to be just a few years ago. For example, a project worth $800 million at $1,200/oz. gold is worth $2 billion using today’s gold price.

That’s a huge increase in value.

Yes, higher input costs will cut into profits. But if the market comes around and begins to believe that gold will stay above even $1,200, there will be a mad scramble as investors pile into the juniors. I believe it’s worth the risks to start averaging in now, and ride the wave higher as junior miners rally. The gains could be huge.

The only way I don’t see this happening in 2012 is if there is a major reversal in the broader stock market. Yet in that scenario, I don’t think these stocks will fare much worse than other small-cap stocks since they are already trading at depressed levels.

This brings me to another potential drag on these stocks…

Many people falsely believe that investing in junior resource stocks is akin to playing the lottery.

This is a bunch of bull.

That’s because lottery ticket wins are pure chance, and they are an all-or-nothing proposition – either you hit it huge or you face a 100% loss.

In contrast, junior resource investing requires skill. Out of every 100 companies I research, typically 10 are worth following, and three to five are worth buying.

Out of these we can expect a few losers, a few that do just OK, and a few big gainers. The net effect is typically a very nice overall gain.

Junior resource stocks do require special analysis of things like their property, country risk and – the big one – stage of growth.

It’s absolutely critical that investors understand where a company is in its life cycle – whether it is an explorer, a developer (who is actually spending the capital to build a mine) or a profitable, producing company.

Each stage carries different risks and has different potential upside, so make sure you know which one you’re looking at before investing.

Lately, producers have been the strongest performers. I love this group, but would advocate buying explorers and developers now too.

At this time last year many of these stocks were falling fast. They haven’t yet come back.

I think that’s going to change. Do your homework and start averaging into quality juniors now to be positioned for the big move.