Make no mistake about it; we have inflation no matter how you measure it.  Many investors measure inflation by growth in the consumer price index (CPI).  By this measure, prices are moving higher at a 3% annualized clip.

CPI is okay, but an increase in money supply is the proper and true measure of inflation.  Prices can rise and fall for many reasons outside of money: changes in supply & demand, productivity gains, availability of substitutable goods. Electronics are particularly prone to falling prices, even when money supply is rising.  It's just that prices would have fallen further had the money supply remained constant.

There's certainly a lot of money sloshing around the economy these days.  Base money – currency and commercial bank reserves held at the Federal Reserve – has soared since the Fed implemented its infamous "quantitative easing" policies in 2008.  Through the Fed's open-market operations (purchasing debt securities with new money), base money has more than tripled in less than four years, as the graph below reveals. 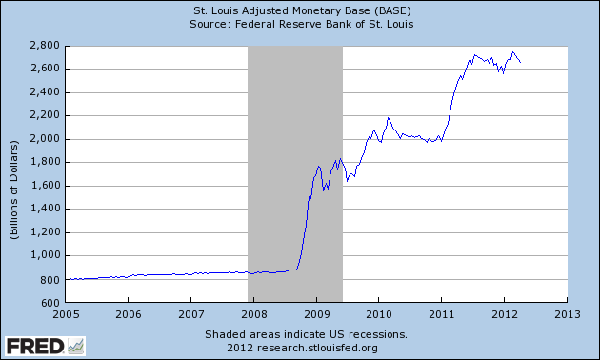 Through the miracle of fractional reserve banking, banks are able to further increase the money through lending.  M2 – a broad measure of money that includes currency and coins, checking accounts, savings accounts, time deposits, and non-institutional money-market deposits – has soared.

M2 reflects lending.  As loans are made, they are usually deposited in one of the aforementioned accounts.  The chart below reveals accelerating money creation since the end of the recession in 2009. 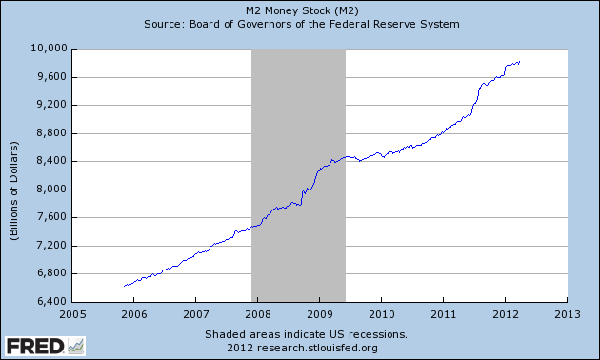 So we obviously have monetary inflation.  We also have price inflation.  CPI running at 3% annually is a percentage point ahead of the Fed's 2% goal. (And 3% is likely a fraudulent number, as most of us can attest with our own consumer purchases.  Shadowstats.com provides a more honest measure of CPI, which shows it running near 6% annually.)

Both monetary and price inflation could get a lot worse, because banks are far below their lending capacity.  Banks are sitting on a record $1.6 trillion in excess reserves – funds used for lending – on deposit with the Federal Reserve.  If these funds were put to use, the M2 money supply could theoretically double.

Investors need to be particularly wary of the following asset classes.

1. U.S. Treasury Securities.  If you own U.S. Treasury securities, you're already getting killed.  The real rate of interest on a 10-year U.S. Treasury note is -1.0%, calculated by subtracting the current annualized CPI rate of 3% from the current yield of 2.0%. You're losing purchasing power as it is, but you'll lose even more when the CPI rises. When interest rates rise – and they will – not only will you lose purchasing power, you'll suffer a capital loss if you need to sell the note before maturity.

2. Fixed-Income Debt.  If you own long-term fixed-coupon bonds, you'll suffer similar losses to those Treasury security owners will suffer: Rising rates will produce capital losses should the bond be sold before maturity.  Concurrently, you'll suffer an opportunity cost, because you'll be foregoing the opportunity to receive interest payments on higher-coupon debt. Holders of long-term certificate of deposits and other guaranteed contracts will suffer a similar income opportunity cost.

3. Speculative Growth Stocks.  When interest rates rise, capital becomes more costly and scarce.  Companies that are losing money or companies that need to continually tap outside sources of capital could quickly find themselves in trouble.

4. Leveraged Investments.  Higher debt levels raise financial risk, particularly if that debt needs to be rolled over in a rising interest rate environment.  Be wary of investments that require leverage to generate returns and companies whose debt exceeds their equity.

5. Bank Stocks.  Banks have been subsidized by artificially low interest rates for the past three years. Many have profited handsomely through carry trade – borrowing short to lend long.  When inflation needs to be wrung from the system, short-term rates are the first to rise.  A flattening of the yield will, in turn, diminish bank profits, because of narrowing of the spread between borrowing short and lending long.

2012 could be a difficult year for investors in the wrong asset class.  The right asset classes – high yields and rising dividend stocks and variable-rate debt – will continue to hold their value in an inflationary and rising interest-rate environment.  Not coincidentally, these investments are the mainstay of the High Yield Wealth portfolio, which provides a haven and a plethora of choices for investors fearful of losing purchasing power and a permanent loss of capital.