Today’s letter is a bit on the long side. But I hope you’ll read it all the way through because it encompasses all of my thoughts on gold: one of the most important asset classes, and something I’ve owned in my personal account since 2006. If you own gold, gold investments or have any plans to buy gold in the future, today’s Daily Profit is a must-read.
First off, I’m not going to predict a speedy recovery for gold prices. That said, I continue to believe that gold offers investors safety in an uncertain world – which is why I added more exposure to the yellow metal in my latest issue of the $100k Portfolio.
The U.S. economy – and the global economy for that matter – is in somewhat uncharted territory. Just consider the following:
Sky-high debt among developed countries…growing government deficits…unfunded entitlement programs such as Social Security and Medicare…printing money at an unprecedented pace to support economies…stubbornly high unemployment…record corporate profits…0% interest rates…and $120 Bitcoins…
I think you’ll agree that there are numerous reasons to pause and consider the true value of money.
While I remain optimistic about the recovery of the U.S. economy and stellar financial performance of some companies, there is reason for concern on a global level.
And that’s why I think every investor – even those of us who are optimists – must own gold.
Here are four specific reasons why I think gold continues to matter…and why the recent decline offers a real opportunity to add exposure:
Reason 1: The Cyprus Effect
For months, Europe was largely absent from the financial headlines. Investors – at least on this side of the pond – were more preoccupied with the presidential election, the fiscal cliff, sequestration. Then Cyprus happened.
One of the smallest countries in the euro zone, the heavily indebted island nation sent shockwaves around the globe when it announced plans to impose taxes on all bank deposits as a condition of its financial bailout, courtesy of the International Monetary Fund and European Union. Cypriot parliament promptly voted the measure down. But then they enacted a similar “tax” on high net-worth account holders, taxing anything over 100,000 Euros at 30%…
Cyprus’ tax on bank deposits sent one clear message to the rest of the world: your money isn’t safe. If “taxing” – code for “stealing,” in this case – bank deposits was the solution for rescuing one financially insolvent country, what’s to prevent it from being the model for future sovereign bailouts?
Next time it might not be a nation that accounts for just 0.2% of the European Union GDP.  It could be Italy. Or Spain. Or Greece. All of these countries are in terrible financial shape, and could find themselves in a similar situation to Cyprus. If so, the effect on the global economy could be disastrous.
If governments can suddenly steal bank deposits as part of a bailout agreement, then your money may not be worth what you thought it was. By nature, the currency becomes devalued – as the euro did in the days after Cyprus’ radical bailout plan became public.
So if you can’t trust paper money, the International Monetary Fund, or your bank, where can you turn? For many people, the answer is hard assets. And gold is one hard asset that has stood the test of time.
Reason 2: Unstable Currencies
Currencies have risen and fallen over the years. Through it all, gold has remained a valuable commodity.
People have been stockpiling gold for centuries. In these uncertain economic times, the precious metal still has tremendous value. As currencies have become devalued in recent years, the price of gold has steadily risen. 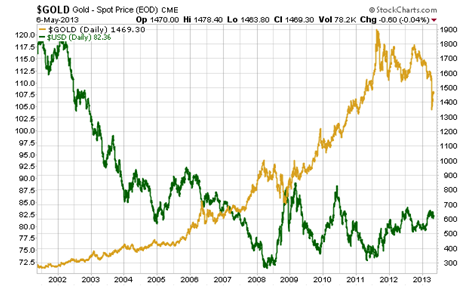 Gold is represented in gold, the U.S. dollar is represented in green.
This chart shows that the U.S. dollar tends to move inversely to the price of gold. Right now the dollar is on an upswing, advancing roughly 12% since late 2011. Meanwhile, gold has plummeted, sinking more than 22%. With countries from the U.S. to Europe to Japan pumping money into their economies, however, currencies – including the dollar – will eventually begin to lose some of their value again. When that happens – as we’ve seen for 12 years now – investors will seek safety in the form of gold.
And right now, gold is the cheapest it’s been in more than two years. With stocks at all-time highs and the dollar hovering near a two-year peak, the yellow metal holds plenty of appeal.
Reason 3: Emerging Market Demand
Those of us in the developed world aren’t the only ones who see value in gold. Increasingly, people in emerging markets are recognizing gold as a safe and secure asset, and a way to protect wealth. Additionally, gold is seen as a status symbol among the wealthy in developing countries.
China and India are the two fastest growing nations on the planet. They are also the largest gold consumers, accounting for more than 43% of the world’s gold consumption.
Both countries value the metal as a visible sign of personal status. In India, especially, gold jewelry is traditionally given as a gift at weddings, births and religious ceremonies. Gold is also a status symbol in China, but it’s also a hedge against inflation – and the Chinese government is actually encouraging the practice, lifting an old ban on purchasing gold as an investment last year.
In the wake of gold’s decline, demand in both countries should continue to grow.
In China, also the world’s largest gold producer, demand is projected to surpass supply by 2015. Meanwhile, in India – already the world’s biggest gold user – consumption is expected to hit 960 tons this year, 11% higher than last year.
As India and China’s love affair with gold progresses, gold should continue to maintain its value.
Reason 4: Gold Investment Ownership is Low
For the average person – and especially in India and China – gold’s value is largely in the jewelry that they wear. People covet gold in their wedding rings, their necklaces, their bracelets and their earrings. They don’t normally think of gold as an investment.
However, in the U.S. and Europe, more and more individuals are viewing it that way.
Even so, last year gold as an investment represented just 1.2% of global financial assets. That’s up from 0.7% in 2010 and a measly 0.2% in 2000. But it’s still well below the 3% of global financial assets individual gold investments comprised in 1980, and the 5% peak in 1968. Compared to those figures, the percentage now is still relatively low.
The meteoric ascent in the price of gold over the past 12 years is undoubtedly a major reason behind its increasing popularity as an investment. But one other factor has convinced more people to invest in gold: ETFs.
The advent of the gold exchange-traded fund (ETF) made it easy for investors to own gold without having to purchase physical bullion. Owning gold became as simple as buying a stock through an online broker once gold ETFs such as the SPDR Gold Shares (NYSE: GLD) – which holds $50 billion of bullion – became available about a decade ago.
For all of these reasons, I believe gold will maintain its relevance for years to come.
Further reading: As I said, I’m buying one gold investment today in my personal investment account. I’ve made this account available for you to view in my $100k Portfolio. If you’re not already a member and you’d like to see what I’m doing with my personal investment account today, I’m also excited about a simple way to buy silver. Click here for the full story. : http://www.100kportfolio.com/landing/25172