Learning to avoid “the trend” is easily the most consistently difficult task investors face.

At the time, I was an investment analyst and editor at a company that hosted a group of financial websites. Most of the websites centered on technology stocks and options trading.  And my website centered on “technology value,” a contradiction in words 15 years ago.

Many of my colleagues traded and invested for their own account. Nearly all of them were focused on tech and Internet-related stocks. It was a weekly – at times daily – occurrence for someone to pipe up on a stock that had appreciated 30%, 40%, and even 50% in just one month.

To be sure, 50% monthly gains weren't the norm. But 100% annual gains occurred with yawn-inducing frequency.

Yet here I was, personally investing in a group of sturdy, sluggish, dividend paying stocks. Yes, the dividends were dependable. But the stocks tended to trade flat or down.

In that go-go period before the tech-crash, my personal picks would have struck many of my colleagues as stupid. Which is exactly why I kept my mouth shut. During my weaker moments, I actually felt stupid.

But what I understood – what I kept in mind – was that the race frequently fails to go to the swift.

A couple years later, in the early 2000s, the intra-office braggadocio ceased. Many of the same colleagues now rationalized how they were in it for the “long-term” and how it was only “a matter of time” before the NASDAQ Composite Index would again challenge 5,000.

Today we are still waiting for the Nasdaq and many high-flying technology companies to challenge their all-time highs. 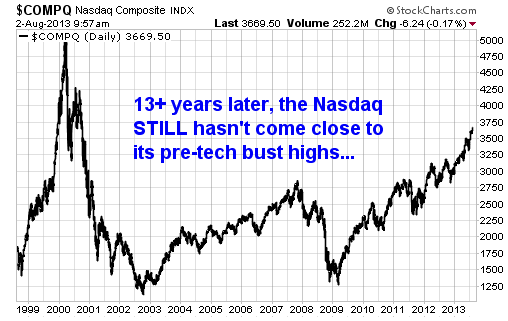 Even many blue-chip tech stocks still trade at deep discounts to all-time highs set more than a decade ago: Microsoft (NASDAQ: MSFT) trades at a 45% discount, Cisco Systems (NASDAQ: CSCO) sells at a 68% discount, Oracle (NASDAQ: ORCL) is 71% below its high.

IBM (NYSE: IBM) and Apple Inc. (NASDAQ: AAPL) are notable exceptions, but they were considered also-rans back in the late 1990s. These were actually contrarian investments during the tech boom.

Keep in mind that I was also collecting dividends each year on these stocks, so my total return was even higher.

Another company BGC Partners (NYSE: BGCP) recently rewarded my “stupidity” as well. This is a large financial and commercial real estate broker that I recommended to High Yield Wealth readers in November 2011.

I'll freely admit that BGC has had me feeling stupid at times. Since 2011, BGC has traded mostly down. At one point, its share price was down 50% from my initial recommendation.

But I had faith in my analysis, and held firm. I continued to recommend investors add to positions.

This past April, BGC shares popped 45% on the remarkably profitable sale of one of its trading platforms. The profit was remarkable because BGC received more for the platform than the company's entire market cap.

Today, many investors who followed my lead on BGC find themselves sitting on 20% – 30% gains and a cost-basis that produces a double-digit dividend yield.

There are a couple additional recommendations within the High Yield Wealth portfolio that I believe offer similar opportunities to realize exceptional price appreciation and high yield on a lower cost basis.

Of course, the key to exploiting these contrarian investment opportunities is the ability to endure feelings of “stupidity” when they arise, and that can be difficult. In my experience, the committed and patient investor often ends up on top.