Big banks are back. And the rest of the stock market is benefitting.

That performance was enough to send shares of financials up 5% in July.

It’s no coincidence that the S&P 500 was also up 5% last month, marking the best monthly performance for the index in three and a half years. The big banks have recently been big contributors to the overall performance of the stock market. The Financial Select Sector SPDR (NYSE: XLF) ETF, which tracks the performance of all the largest U.S. banks, has risen 39% in the last two years. Meanwhile, the S&P 500 has risen 31%.

The correlation is almost eerie. Take a look at this two-year chart: 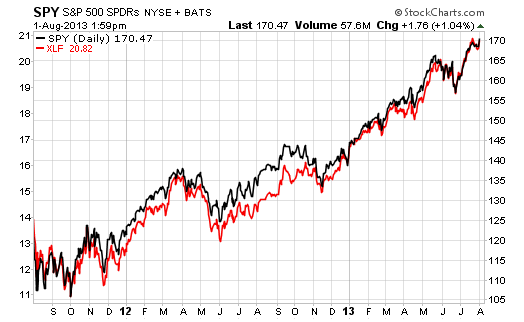 Essentially, as the banks go, so goes the market. The correlation isn’t hard to figure.

After all, the banks got us into the 2008-09 financial mess when “Too Big to Fail” banks required considerable capital infusions from the government. It became painfully clear then that the health of the U.S. economy was deeply dependent on the health of the country’s largest financial institutions. At least that was the view of politicians and Treasury Secretary Hank Paulson…

Ever since those big bailouts, much has ridden on the recovery of the financial sector.

How are they doing it? By taking on less bad loans and investing smarter.

There were no “London Whales” or other disastrous, multi-billion dollar trading losses disclosed by the big banks this earnings season. An improving housing market has also played a role in the banks’ recovery. And the number of foreclosures is dwindling, falling to a six-and-a-half-year low in June. That means banks aren’t losing money on bad loans the way they were even two or three years ago.

And as stocks thrive – reaching a new record high yet again on Thursday – the investment banking divisions are benefitting from increased underwriting fees for new stock and bond offerings.

While the banks may be thriving, other companies are struggling. If you take away the banks, overall earnings among S&P 500 companies are forecast to rise just 0.5% this quarter, according to Capital IQ. The 24% earnings growth from banks is the best of any industry group in the S&P 500.

Perhaps the most surprising news is that non-bank stocks have also rallied to all-time highs, despite lackluster earnings growth. But it’s all because banks are carrying this market.

Can they keep this up? We think so – especially if interest rates continue to rise.

If the big banks continue raking in profits, the market will continue to follow.