There are two things you should remember to do between now and November 6: register to vote and buy gold.

Presidential elections have historically been a boon for gold prices. Check out the moves the yellow metal made in the two months following the 2004 and 2008 elections: 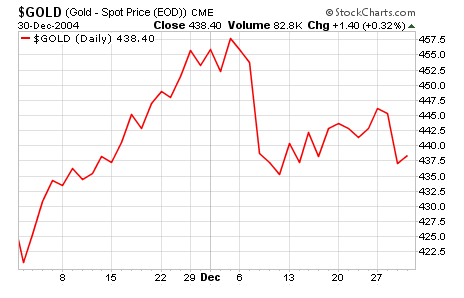 The bump gold received after George W. Bush was re-elected in 2004 was more immediate. Prices jumped 8% in a month after the election before pulling back for a net 3.5% gain by year’s end.

Gold’s 2008 rally, after Obama was elected, took a couple weeks to get going. But by year’s end, the metal had gone on quite a two-month run, gaining an astounding 21.5%.

What made those gold-buying opportunities even more attractive was that leading up to the election, gold was tanking.

In 2008, gold prices plummeted nearly $200 an ounce during a two-week span in late October.

In 2004, gold was down for the first three weeks of October before it started to rally 10 days before the election.

This year gold prices are experiencing a similar pre-election slump. Check it out: 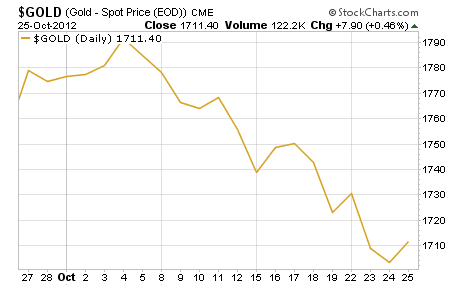 After topping out at around $1,790 an ounce the first week of October, gold has since fallen off a cliff, dipping dangerously close to the $1,600s in just three weeks.

So now, as it was prior to the last two elections, gold is relatively cheap – at least compared to where it was a month ago. That makes for a good entry point.

Why exactly does gold tend to rise after presidential elections? Stability following an extended period of uncertainty is one common explanation.

How stocks behave after an election usually depends on which party is in office – markets rise the year after the election more often when a Republican is elected than when a Democrat takes office. But gold tends to rise regardless of who’s in office.

This year’s post-election gold rally could be even more pronounced. With a third round of Federal bon buying underway, the U.S. economy is about to be flooded with so much new money that it will drive the value of the dollar down.

And as we’ve written repeatedly here at the Resource Prospector – when the value of the dollar drops, gold prices rise.

Pre-election uncertainty has been driving gold down over the past month. But that’s nothing new.

Here’s hoping that form holds after the election too – and that gold goes on another major run with a new (or old) President in office.