Every morning I get in my truck and I’m bombarded with the same radio routine.
Car dealers are running ads like crazy. There’s not even a break in between for a Dunkin’ Donuts (Nasdaq:DNKN) commercial. Instead, all I hear is one car dealer after another touting their “mega-deals” and “double-whammy” savings.
This morning there were three car commercials in a row. At this rate I’d expect every car I pass to be fresh off the lot.
But the reality is that the roads are littered with old cars. In fact, the average age of cars and trucks on the road in 2013 is 11.4 years old. That’s slightly older than last year’s average age of 11.2 years, and well above the pre-recession high of 10 years old.
This old car phenomenon is exactly why car dealers across the country keep pushing their ads. When the recession hit, American’s decided to hold onto their old cars. Now, they are in desperate need of upgrades. And car dealers are jumping at the opportunity.
With household income rising, consumer confidence improving and old cars getting a bit too rusty, new car sales are surging. As I wrote in July, if sales continue at the same rampant pace throughout the rest of the year they’ll reach nearly 16 million vehicles. That’s just a tick below the pre-recession record of 17.5 million car sales in 2005.
The obvious way to invest in this car upgrade cycle is to buy shares in the automakers. While that is a straightforward option, my preferred investment strategy is to invest in the auto dealers.
That’s because the dealers stand to benefit from more than just new car sales. They get a piece of used car sales as well. And it might surprise you to know that used cars often have much fatter profit margins than new cars.
For example, I’ve studied one dealer that makes $2,760 on a used car sale, versus $2,260 on a new car sale. That’s a 22% higher profit on the used car. And the profit margins on used cars are much fatter too; a whopping 15% for a used car versus just 7% for a new car.
In many cases when there is a trade-in a car dealer grabs a profit on both the new and the used car. That’s the real reason dealers run those “double-whammy deal” ads I hear every morning.
Used car sales are likely to increase for two reasons. First, more people are upgrading their old cars for new models. And second, leased cars are being turned back in at a growing pace. These leased vehicles represent a major growth catalyst for the auto dealers.
That’s because during the recession few people leased cars, but as the economy improved leasing was an attractive alternative to buying. Now, all of those leases with 2-3 year terms are starting to end. And many of these cars will show up on lots to be sold as used cars.
J.D. Power and Associates predicts that off-lease volumes are just now recovering from a historical low and will rise to 1.73 million cars in 2013, a 35% increase over 2012. The chart below from Credit Suisse shows just how deep the trough was, and how much room there is for off-lease volumes to pick up before they reach the historical average around 2.6 million cars a year.
The auto dealerships are in a perfect position to capitalize on this opportunity. 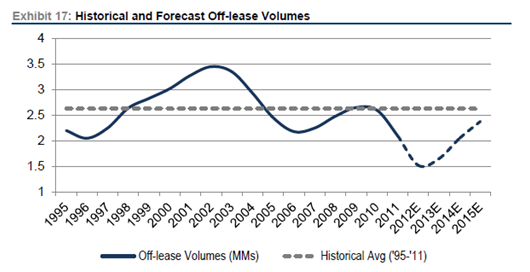 With the average car and truck age well above the historical norm and consumers feeling much more financially secure, I expect that car sales are going to remain strong over the next 18 months.
And the car dealers are the best positioned to capitalize on the trend. They’ll make money from new cars sales, as well as the highly profitable used cars that get traded in.