“What will eventually happen is that Treasuries will be shunned by investors. More and more people will see Treasuries not as secure savings vehicles, but as guaranteed money losers. And everyone will rush to sell their Treasuries at any price.”
My colleague Kevin McElroy wrote those words last October. Less than a year later, his fears have come true…
A mass exodus from U.S. Treasuries and bonds is underway. Treasury outflows from foreign investors reached record levels in June. China and Japan, two of the biggest holders of U.S. debt, accounted for almost all of a record $40.8 billion in Treasury sell-offs that month.
Treasuries aren’t the only U.S. security foreign investors are fleeing. Foreigners sold off $66.9 billion of long-term U.S. securities in June, the most since August 2007.
Bond funds are also suffering. U.S.-registered bond mutual funds and ETFs have suffered $4 billion in redemptions so far this year, putting bond funds on pace for their biggest loss since investors pulled $7 billion in 2004.
That’s quite a turnaround from the last four years. From 2009-2012, investors poured $1.2 trillion into bond mutual funds and ETFs. Meanwhile, the net Treasury outflow is the highest it’s been since the government started compiling data in 1977.
Why the sudden bond sell-off? It comes down to one word, really: tapering.
As most of you probably know, the Federal Reserve has been buying back bonds for the better part of five years now in an effort to stimulate the sluggish U.S. economy. “Quantitative easing” is what they call it. The latest round of quantitative easing – known as QE3 – was the Fed’s most aggressive stimulus effort yet: $85 billion in buybacks per month.
In April, Ben Bernanke said that the Fed would soon begin to “taper” off QE3. The second he uttered that word, yields started to rise and bonds began to lose their value. Once quantitative easing ends, bonds will lose their biggest buyer and prices will plummet. In fact, it’s already begun.
Just look at this two-year chart of the iShares Barclays 20+ Year Treasury Bond (NYSE: TLT): 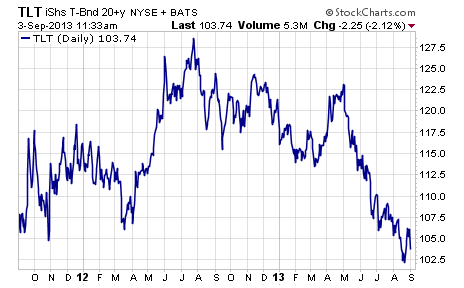 Since the beginning of May, the fund has fallen 16%, dipping to its lowest level since 2011. And that’s just a reaction to the possibility of Fed tapering in the coming months. Bond outflows may further accelerate once Bernanke pulls the plug on QE3.
It appears that the 30-year bond bubble is about to burst. U.S. Treasuries are no longer a safe haven. Interest rates are rising fast – the yield on 10-year U.S. government bonds is approaching 3% for the first time since July 2011. The yield was roughly half that number as recently as last July.
The good news is that while many assets are correlated with Treasuries (most bonds, for instance) there are a handful of investments that benefit from crashing bond prices. As money leaves bonds at a record pace, it has to go somewhere. Some of it will sit in cash, but a good chunk of it is already flowing into a different asset.
And we’ve seen that whenever bonds fall, another alternative income investment rises. It’s happened time and time again throughout history.
We explore that history in a new special report titled, “The Bond Bubble Survival Guide.” The report lays out every interest-rate scenario that’s likely to unfold as the Fed begins to taper. It also offers recommendations for investments that can help income investors build their wealth amid a bleak bond environment.
The report is free to High Yield Wealth subscribers. If you’re not a High Yield Wealth subscriber, click here.
Don’t fear the taper. Yes, investors from China to Japan are running for the hills as Bernanke threatens to drop the hammer. People are selling off bonds at a record clip. But that doesn’t mean there aren’t income alternatives.