If you’ve
been looking for a dip to buy, your opportunity may be coming soon.

Stocks got
whacked yesterday, and the S&P 500 dropped below an important support point
at 1,188. Aside from the past few weeks, that support level hasn’t come into
play since September 2008, when the stock market was crashing. Before that,
you’d have to go back to the October 2005 lows to find when 1,188 was in play.

There were
several catalysts for yesterday’s drop. Debt problems with Greece and Portugal are weighing on investors.
And Goldman Sachs testimony before Congress didn’t help either.

It’s been
revealed that Deutsche Bank (NYSE:DB) has been informed by the SEC that it,
too, is being investigated for mortgage-related fraud. It appears that no
charges are pending at this time, but this gives investors another thing to
worry about.

I said
at the beginning of earnings season that I’d be watching financial stocks as my
"canaries in the coalmine" for earnings. And their action has been
interesting.

Overall,
bank earnings have been very good. But then there’s the situation with Goldman
Sachs, the SEC and the financial reform debate in Congress.

A quick
look at the Financial SPDR ETF shows pretty clearly that, even though earnings
have been solid, banks appear to have put in a short-term top. 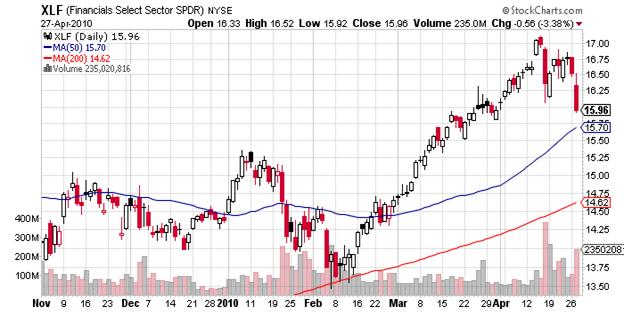 In other
words, no sooner than we get the big sell-off that the bears have been expecting
for weeks, the stock market is likely to reverse the decline and rally.

I got
a letter from Dave K:

I want
to see you address the role of GS in Greece getting into the EU and what
the repercussions could be?  Could this be the real threat to GS that puts
the hammer to the company??? We all know that the SEC is just making hay that
will not amount to more than feeding one or two cows.  The next question
is what did GS do to get other countries admitted to the EU?

As far
as the American consumer I figure they are spending their mortgage money at the
retail outlets (not WMT since they have shafted their women employees-boy is
this getting fun) instead of giving it to the banksters. I wonder when this
will hit the banks-I forgot this is all off balance sheet!!!!!

I discussed
Goldman’s complicity in Greece’s
scheme to hide its debt problems from the EU on February 25th. And it’s likely that Goldman has
performed a similar "service" for others.

I’m not
sure there are any legal repercussions for Goldman related to the Greece
case. But it’s clear that such transactions are not helping the firm’s
reputation.

And what’s
more, it’s not creating much of a counterpoint to the Congressional push for
new financial regulations. Goldman is reinforcing the need for the Volcker
Rules at every turn with questionable ethical behavior.

And that
will probably be Goldman’s ultimate punishment.

As for the
second point, I hope no one has lost sight of the "shadow inventory"
of houses that are facing foreclosure. No doubt homeowners who have quit paying
their mortgage and are waiting to be foreclosed on are helping consumer
spending.

But it’s
also important to remember that banks have an incentive not to foreclose. Once
they do that, they have a liability on their balance sheet. Also, we should
note that even now, banks are still adding loss reserves to offset the damage
of non-performing loans. That’s a trend we can expect to continue.

And we can
also expect the housing market to take a few more years to work its way out of
the hole. Because that shadow inventory has to get worked off, too.

Ideally,
the housing inventory will be worked off gradually. But we also know that
things rarely work out ideally.