Oil prices have surged over the past month amid heightened tensions between Iran and Israel along with Europe and the U.S. 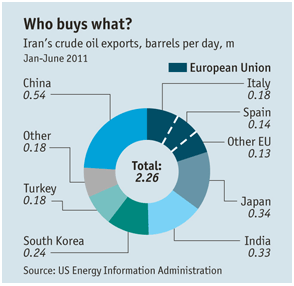 Iran has been not so secretly working with uranium over the past several years. The country has recently bragged about its burgeoning and questionably "legal" nuclear power facilities, an act that has many countries fearing atomic weapons are next.

In addition to the uranium announcement, Iran also banned oil exports to Britain and France earlier this month. While this move will likely have no material impact on the overall European economy, it could be a sign of worse actions to come.

The "signs of worse actions to come" is clearly what drove oil back above $105 since the Iranian ban on oil exports to parts of Europe will have no noticeable impact on that economy or global oil supplies. Iran represents only 4% of global oil production. Also, France and Britain import less than 1% of their oil from Iran. What’s more, Europe barely uses 20% of Iranian exported oil.

While the actual amount of oil may represent little of the total world supply, the fear of escalating tension in the Middle East is a threat. And traders always overreact to threats.

The oil market went through the same fear trade last summer. Only 12 months ago, the price of oil began a rally from $85 to $115 over a three-month span. The catalyst for the rise was tensions in Algeria and Libya along with the fear that neighboring nations would also revolt.

This spring it’s the same trade . but with different nations. Iran and Syria have replaced the North African countries. And while the oil issues are exclusive to Iran, the tension has picked up in the Middle East. The real fear is that Iran will provoke more conflict in the Middle East and disrupt supply lines.

On a fundamental basis, I cannot make an argument for oil to be above $90, much less more than $100, given the potential for a weak European economy and a hard landing in China. Nevertheless, in the near term a fear trade will thrive, and oil prices can easily stay above $100 and go as high as $125.

Today’s video analyzes a chart of light crude oil. The tensions surrounding Iran and Europe may have been the excuse oil needed to rally to $125 this year. This video will show you how to trade the increase in oil, as well as another potential major top.