One eternal flame located just south of Buffalo, NY could change every assumption about U.S. energy.
Tucked behind a small waterfall in a county park – at the northern edge of the Marcellus Shale, a naturally occurring eternal flame flickers in the town of Orchard Park, New York. 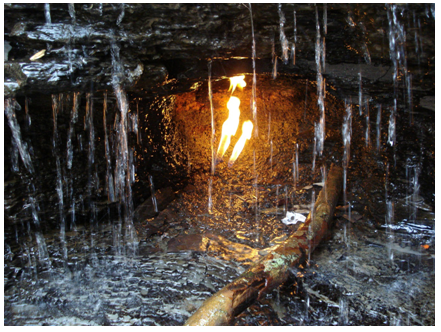 But there’s something unique about this eternal flame in New York that could have incredible implications…
According to a recent article in Live Science, an entirely different geological process feeds the New York eternal flame. It’s a process that’s not fully understood by geologists.
In most eternal flames, the fuel source is deep underground in shale. If the shale is near a heat source at or above the boiling point of water, larger carbon molecules in the rock break down.
When these molecules break down, the shale releases natural gas, and seeps to the surface. Occasionally, these are lit by a person, forest fire, or lightning.
Or that’s how all of them are supposed to work.
But the New York flame is operating in a very different way. According to Live Science:
“In this case, though, the rocks that feed the flame are only warm — “like a cup of tea” — as well as geologically younger than expected, and shallow, Schimmelmann said. Those findings suggest the gas is being produced by a different process, whereby some sort of catalyst is creating gas from organic molecules in the shale, he said.”
For investors interested in U.S. energy development, there is an important takeaway.
There is likely to be much more natural gas throughout the world than previously thought. Not just a little bit more. But much, much more.
We’re talking orders of magnitude. We’ve already seen American oil and natural gas estimates increase considerably in just the past few years.
According to the U.S. Energy Information Administration, the United States has increased its oil and natural gas resources by 35% and 38% respectively since 2011– entirely due to shale development.
This goes along with something I’ve been saying for years…the United States is on the cusp of achieving energy independence.
The investment implications are not immediately obvious. More natural gas and oil won’t necessarily help the bulk of the explorers, developers, drillers, and producers in the sector.
That’s because increased supply generally means lower prices – and lower profit margins.
Which is why I’ve focused my research on what are known as “mid-stream” companies. The simple fact is – the United States has the best developed pipeline and energy storage infrastructure of any country in the world.
Unlike our vast oil and gas reserves, this system is largely built – in existence and relatively modernized – and throwing off huge amounts of cash to investors.
Many of these mid-stream players increase their payouts every year – and there’s plenty more to come.