Debt burdens are at epic proportions on every level – global, national, state and local. 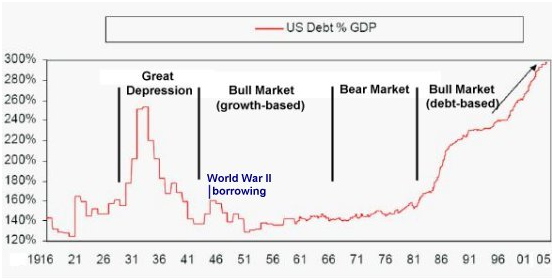 And now the Keynesian argument to spend more through exponential expansion of credit is about to be exposed as a fraud.

But I could care less which side is right; Keynesians or Austrians. Frankly, it doesn’t matter to me. I am only concerned how self-directed investors and traders can take advantage of the situation.

And this situation is setting up what I consider to be the trade of the decade. Simply put, this trade is to short U.S. Treasury bonds. This is almost a no-brainer in my opinion.

And now advanced economies are witnessing the damage of the flawed theory firsthand.

Ireland, Spain, Portugal, Greece and now the seventh largest economy, Italy; all are in trouble. The top five largest economies, including the U.S. are not far behind.

Those in the know realize the collapse is imminent and they are not hiding their opinions. Bernanke and friends essentially told the global market that U.S. growth would be stagnant for several years as the fed planned to keep interest rates low through ‘at least’ mid-2013.

Maybe the fed said ‘at least’ because they really can’t afford to admit that they agree with the International Monetary Fund’s recent assessment that global debt issues would persevere for ten years, or more. Director Christine Lagarde warned of the risk of a ‘lost decade’ for the global economy unless nations act together to counter threats to growth.

"In our increasingly interconnected world, no country or region can go it alone," Lagarde said in a speech to a forum in Beijing several weeks ago. "There are dark clouds gathering in the global economy."

But haven’t we already experienced a lost decade? Just look at the S&P’s performance over the past ten years. 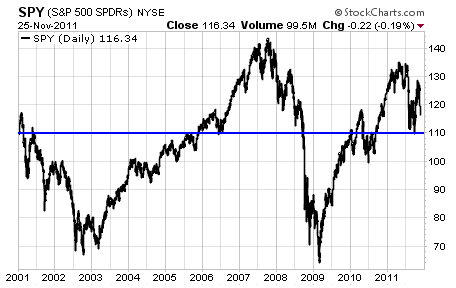 And now that the U.S. and other leading economies have exhausted every effort to inject life into the global economy, we are left with bleak GDP growth and inevitable inflation woes.

Yet, with bonds of leading economies becoming ever riskier, the world is still looking to the U.S. for a stable return – or what many on Wall Street call ‘the safety trade.’

This could last for several months, if not several years. And with more money piling into U.S. Treasuries, interest rates could push even lower.

Just look at what effect ‘the safety trade’ has had on U.S. bond prices. Remember that as yields fall, bond prices rise. 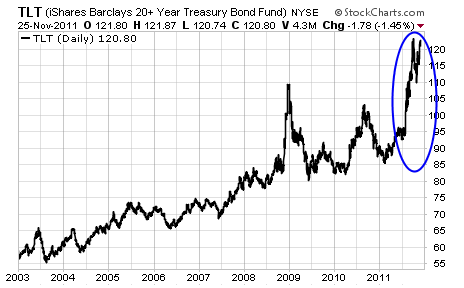 The 10 year chart of the iShares 20+ Year Treasury Bond Fund (NYSE: TLT) above is evidence of how interest rates and the bull market in bonds has evolved since 2003. If you look towards the blue oval you will notice what should be the final stages of the decade long bull market in bonds. There is no doubt that the move in 2011 has been parabolic with Treasury bonds soaring over 40%.

Fortunately for the bond bulls, given all of the world’s troubles, ‘the safety trade’ still looks intact. But, how much longer can rates stay at record lows? Realistically, the reward is now to the downside.

And that is exactly why I think shorting TLT or buying TBT could be the trade of the decade.

I mention TBT because it is a more aggressive ultrashort for 20+ Year Treasuries. Because of my conviction that the bond bubble will eventually burst wide open, I want to have some exposure to an aggressive ETF.

So how would I play TLT or TBT?

You could simply short TLT or buy TBT- both are easy to do.  However, I prefer using an options strategy that allows for duration. In this case, I would buy LEAPS puts on TLT and LEAPS calls on TBT with the intent to roll them out further if bonds remain stagnant or rally.

LEAPS, or Long-term, Equity Anticipation Securities, are long-term options that typically have a life of 2 years or longer.

The reason I would use LEAPS is because I prefer not to tie up a significant amount of capital to one position. Yet, I still want a decent amount of exposure, so a leveraged position like LEAPS allows me significant, defined exposure.

If you would like to know more specifics on how I would make "the trade of the decade" please do not hesitate to email me at [email protected].