As someone who considers himself a contrarian, my interest is always piqued by alarmist headlines. Which is why I'm interested in housing. For the past two years, the sector has been a wellspring of head-for-the-hills Cassandraisms.

In the past week alone, I stumbled over The Wall Street Journal's "The Real Estate Market Just Hit Rock Bottom," the Chicago Tribune's "Pockets of Hope in Housing Despair," and the Indianapolis Star's "Housing Has Yet to Hit Bottom."  My favorite, though, was Time Magazine's "How 'Shadow Inventory' Is Killing the Housing Market."

In my early years of investing, I'd look to national magazines like Time, Newsweek, and BusinessWeek to gauge market sentiment. The more the article was tinctured in all-is-lost, the-world-is-ending prose, the more interested I was in investing against the writer's conclusion.

I couldn't help but peruse the aforementioned Time article, and it was just as alarmist as I'd hoped it would be – a foreboding tale of how millions (up to 10 million) of potential foreclosed and distressed properties are destined to weigh on home prices indefinitely.

Run for the hills, right?

Well, not exactly.  There are a couple of extenuating factors.  I've looked at shadow inventory data from real estate market analysts Zillow and CoreLogic, and the estimates fall between 2.5 to 3.5 million.  What's more, the distribution is asymmetrical, with a heavy concentration of distressed properties in the sand and sun states of Arizona, Nevada, and Florida.  The rust-belt states of Illinois, Ohio, and Michigan are also well represented.

I don't want to make light of the impact of distressed properties; they have driven down home prices in many metropolitan regions.  In fact, in the fourth quarter of 2011, the S&P Case/Shiller Home Price Index reveals a noticeable decline in national home sale prices.  Perhaps this national price trend has inspired the latest spat of pessimism.  It's important to remember, though, that all real estate is local.  In other words, national figures often don't apply to a particular local market.

I like the pessimism that weights on the housing market today; pessimism always creates opportunities.  You might have felt much more comfortable investing in housing stocks in 2006, the height of the housing boom when optimism was in full bloom; that is, until you were killed in the subsequent sell-off.

Of course, no one is sure which direction home prices will take in the coming year, but I would wager dollars to drachmas they're much closer to a bottom than to a top. S&P Case-Shiller data also show existing home prices today are about where they were in 1997.  Yes, prices can go lower, but I expect not by much.

I think the housing sector is ripe for new investment; not only are home prices low, but there is a dearth of new supply coming to market.  The graph below from the St. Louis Federal Reserve Bank shows how few new homes are being built. 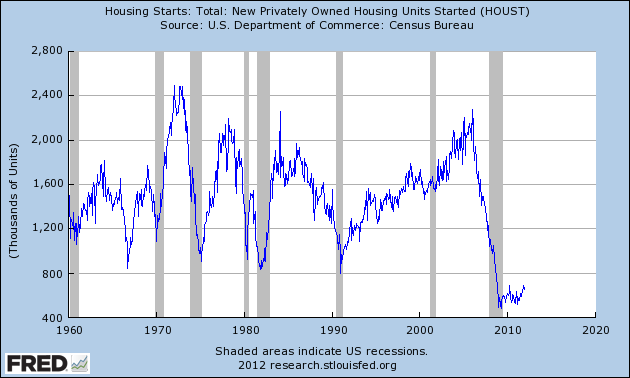 A couple of demographic considerations are worth keeping in mind when vetting the above graph. In 1960 there were 184 million Americans.  Today, there are more than 308 million.  More people means more household formation and more housing demand.   As the economy improves, so will household formation.

Here's another consideration: Mortgage insurer PMI Group data show that between 2007 and 2011, the number of households that are "doubled up," or have grown children or other potential household heads living with their relatives in the same house, grew from 20 million to 22 million. About six million of these housemates are young adults aged 25-34 living with their parents – an unsustainable situation for both parties.

There are a number of options for investing in the recovery. You can invest directly in home builder stocks; you can invest in the stock of companies that cater to home builders and homeowners, such Owens-Corning (NYSE: OC) or Home Depot (NYSE: HD); you can take both routes by investing in a diversified ETF such as SPDR S&P Homebuilders ETF (NYSE: XHB) or iShares Dow Jones U.S. Home Construction ETF (NYSE: ITB).

At High Yield Wealth, we have a mandate of investing for income and yield, and there is little of both in most traditional housing investments. That said, we have one income position we consider a play in housing that many investors are likely to overlook.  I'm speaking of Plum Creek Timber (NYSE: PCL), the largest timberland owner in the United States, which yields 4.3% as I write.

You see, timber demand and timber prices are closely tied to housing construction. An average new home contains more than 14,000 board feet of lumber. At the the peak of the housing bubble, starts were running at 2.3 million units annually.  Board-feet of lumber for residential construction peaked at 28.6 billion in 2005, and plummeted to 6.5 billion board-feet by 2009.

The bottom line is the housing sector will return, much like the tech sector returned after the dot.com bubble burst in 2000.  Despite all the negative reporting, I expect the sector to return sooner than later.  To steal a quote from Ernest Hemingway: "How do you go bankrupt? Two ways: gradually, then suddenly.  Markets work much the same way: They recover gradually at first, then suddenly.  I think the housing sector is nearing the end of its gradual part.