Shares of the world’s largest technology company declined another 8.5% last week, dipping below $400 for the first time since December 2011. As has been the case several times during its recent losing skid, last week’s pullback left many Wall Street analysts scratching their heads.

Apple’s latest decline continues a pattern of falling lower every time Wall Street’s talking heads insist it has hit a bottom. The stock mounted small rallies in January, February and March – only to fall further still each time. 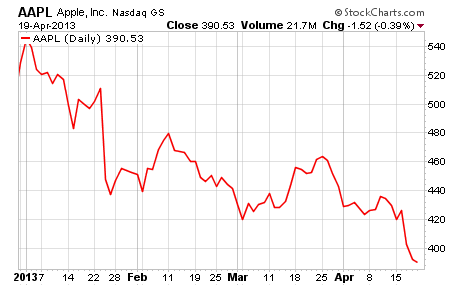 But Apple’s decline extends back further than the beginning of the year. Right now it’s at seven months.

Here’s a timeline of Apple’s performance since late September:

Where will Apple’s freefall end? Have we finally hit bottom?

With the stock trading at just 8 times forward earnings and analysts still setting a mean price target of $600 per share, it’s reasonable to think now is the time to buy Apple. But the PE has been low for months, and Wall Street has been repeatedly wrong about this stock of late.

Besides, this afternoon’s first-quarter earnings report (5 p.m. ET/2 p.m. PT) looms as a major potential turning point for the stock. If Apple falls short of earnings estimates, as it has the past two quarters, then the stock likely has a ways to go before it hits bottom.

Options traders are already preparing for a 7.5% post-earnings move – a reflection of Apple’s recent volatility. A 7.5% move to the downside would push Apple shares to roughly $360. A 7.5% move to the upside, however, would be the stock’s biggest gain in two and a half months.

One thing that could help Apple is lowered expectations. Analysts are anticipating an 18% year-over-year decrease in earnings per share, and a mere 8% increase in revenue. Those are some of the lowest projections in years, giving the company a nice low hurdle to clear.

It would be foolish to assume anything about Apple at this point, however. Not after how it has repeatedly defied Wall Street’s stubborn optimism in recent months. Looks can be deceiving when it comes to the world’s largest tech stock these days.

I’d wait to see what happens with today’s earnings before making any major decisions on the stock. What may look like the rally every Apple investor has been waiting for could be yet another false start.

Full Disclosure: I currently own shares of Apple.