Investors are holding their collective breath to see what Ben Bernanke will say tomorrow.
They’ve been on pins and needles ever since he mentioned fed tapering at last month’s FOMC meeting. Since then, investor fear has spiked 24% and stocks have declined 1.6%. On the surface, it seems like a market-wide overreaction. In reality, it could be merely the calm before the storm.
QE3 – the Federal Reserve’s $85-billion a month bond-buying program – may be coming to an end sooner than some expected. The third round of Federal quantitative easing began nine months ago, and is barely more than half the duration of QE1, which ran from November 2008 through March 2010. As during the first two rounds of easing, stocks have risen sharply over the past nine months.
Since QE3 was announced on September 13, 2012, the S&P 500 is up 11.5%. That’s just ahead of the 10.2% the index returned during QE2 (November 2010-June 2011), but well shy of the 37.3% returns posted during the 16-month QE1.
All of that will change the second the Fed ceases its bond buying.
We’ve seen it before. After QE1 and QE2 ended, stocks immediately went in the tank. Each time, it took the market seven months to return to the level where it was before quantitative easing ended.
The following two charts paint a sobering picture of where we could be headed:

S&P 500 in the Seven Months that Followed QE1 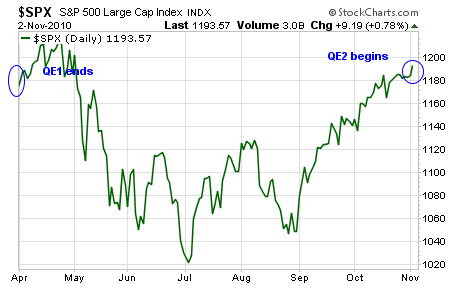 Stocks fell 11% in just over two months after the Fed pulled the plug on QE1. It took until November – when a second round of quantitative easing was implemented – for stocks to fully recover.
The same thing happened again after QE2 ended:

S&P 500 in the Seven Months that Followed QE2 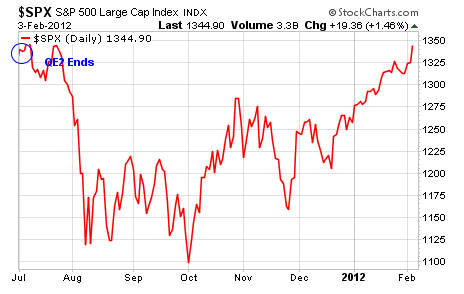 QE2 ended on June 30, 2011. Within five weeks, stocks had fallen 16.5%. They didn’t return to their end-of-QE2 level until early February. Once again, the recovery took seven months.
Given that not-so-favorable history, it’s easy to see why investors have such trepidation when they hear the Federal Reserve chief say that fed tapering may occur. It took seven months for the market to recover from the first two QE closings, with an average pullback of roughly 14%.
With stocks just off all-time highs, there’s even more room for them to fall this time. The good news, however, is that the U.S. economy is on much more solid footing than it was when the Fed pulled the plug on the first two rounds of easing.
When the Fed put an end to QE1, the unemployment rate was just under 10%. It was only down to 9.1% at the end of QE2. Now it’s down to 7.6%.
That’s half a percent lower than the 8.1% unemployment rate that existed when the Fed began QE3. Will that be enough of a drop-off for Bernanke and the FOMC to start the Fed tapering?
Investors should hope not. If so, we could be in for a rough seven months.