A constantly devalued dollar makes it nearly impossible to come to meaningful and useful conclusions about the price you pay for anything.

Today, you and I enjoy the privilege of paying lower gas prices than our grandparents did back in 1918.

That’s on an inflation adjusted basis. If you look at just the nominal price, you would come to a vastly different conclusion. 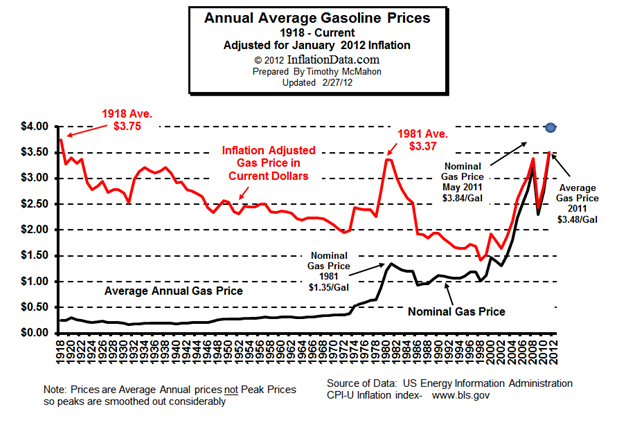 Notably, it wasn’t so long ago that gasoline sold for a record low price denominated in 2012 dollars.

Perhaps even more interesting is that this inflation-adjusted chart shows we’re now paying more, on average, than we did during the nominal dollar record price for gasoline back in 2008.

What does it mean? It means that the dollar might be the worst common way to evaluate the price of anything. It means that though very few of us have seen our pay increase by 100% in the past 8 years, we’re now paying 100% higher gas prices for the simple fact that the dollar has been devalued by our elected officials in the Capital.

Adding insult to injury, those same officials urge patience and understanding – to trust their actions. Inflation is “good” according to these officials. Inflation means that the money you borrow today is cheaper to pay back tomorrow.

Put another way, we’re asked to believe that paying more for gasoline on a nominal basis is always good news.

For these central planners, lower prices are never good.

Central planners love higher prices not because they’re stupid (though many of them are) but because their interests are in direct opposition to the interests of you, me and every other regular citizen.

Higher prices are the direct result of inflationary policy that lets central planners spend money they don’t have without actually having to raise taxes. And while you and I might enjoy lower prices, that kind of dangerous thinking can never be uttered by leadership. They have to pretend higher prices are for “the greater good.”

It’s just another example of the kind of obvious falsehoods our leadership has to tap-dance around in order to pursue their true goals.