Another week, another stock market record appears in jeopardy of falling.

Before retreating in the afternoon, the S&P 500 came dangerously close to topping 1,565.15 early yesterday – a record high that has stood since October 2007. Meanwhile, the Dow Jones Industrial Average has been establishing new all-time highs on almost a daily basis, cracking the 14,500 mark last week.

Even with stocks at or near record highs, many analysts think the rally is far from over. History suggests otherwise.

The last time the S&P hit a new high, the honeymoon didn’t last long. In the first week of October 2007, the index vaulted above 1,550 for the first time in its history. Here’s what happened next: 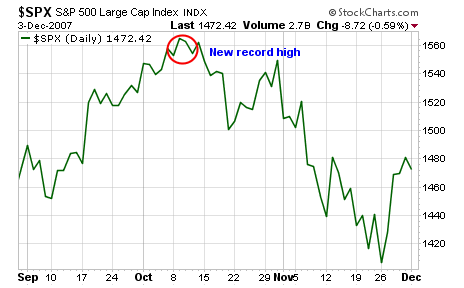 After hitting 1,565, the index plummeted 10% in roughly six weeks. As it turned out, that was merely a precursor to the massive decline that was to come the following year, when the subprime mortgage crisis hit Wall Street.

Now, let’s put these two rallies in their proper contexts. In October 2007, stocks had been on a major run since mid-2006, rising about 27% in 15 months. The finishing kick from mid-September to mid-October that you see above – in which the index tacked on another 115 points – took the S&P into uncharted territory.

And investors freaked out.

At the time, the subprime mortgage crisis was just a faint whisper and Europe’s sovereign debt problems hadn’t yet fully surfaced. There were no more headwinds then than there are now, what with sequestration, high unemployment and seemingly half the eurozone requiring bailouts.

Investors have largely ignored those headwinds in recent months, pushing stocks up 10% since late December. Ever since the fiscal cliff was averted just before New Year’s, U.S. markets have been unencumbered, with Wall Street ignoring everything from the sequestration deadline coming and going without a deal to Cyprus nearly getting booted from the eurozone. Perhaps sticker shock will be the thing that finally gives investors some pause.

That seemed to be the case five-and-a-half years ago. Once stocks reached such uncharted territory, it appeared to freak investors out. A correction seemed inevitable, and Wall Street looked for any excuse for a pullback.

This time around, with a similar pullback long overdue, sticker shock may again be the thing that triggers the correction. Investors have managed to tune out all the troubling financial headlines of late; but they can’t ignore what’s right in front of them – that stocks have never been this high.

Having said all that, a 5% to 10% correction wouldn’t necessarily be a bad thing. Sometimes the market needs a couple months to catch its breath and reboot. Such overbought levels – especially amid so much financial turmoil – are unsustainable.

The S&P 500 has pulled back more than 7% four times in the last two years. On three of those occasions, the index has vaulted even higher within months of the correction.

Consider what happened after the following corrections:

Corrections are healthy. They typically last only a couple of months and seem to give investors the stomach to take stocks even higher than they were before.

Another correction is likely coming. Six months from now, we may be glad it did.

Editor's Note: If you would like to invest alongside Ian Wyatt… and see exactly what he's doing with $100,000 of his own money in the market… then consider taking a free, 30-day trial to our real money alert service, $100k Portfolio. You'll get instant access to Ian's entire portfolio and see every special report and every piece of research. Click here to try $100k Portfolio, free.