The White House was quick to cheer the rosy employment numbers from the Labor Department earlier this month. And the market responded with a rally.

But something doesn’t add up.

If the economy is growing and factories are churning out products, then why are 23 million Americans still jobless or underemployed?

Well, I’m here to tell you this is simply not true.

Despite the recent photos of rusted out steel mills and shuttered factories in the media, America is as productive as ever.

Truth is, the U.S. produces 25% more goods and services today than it did in 1999, while using the same amount of workers, according to Bloomberg BusinessWeek.

How is this possible? Are we working ourselves to death?

No, American muscle and brawn is being replaced by strings of code and microprocessors. Machines are doing everything from routine tasks like sweeping floors to high-precision welding.

Robots are the new face of American industrial might. 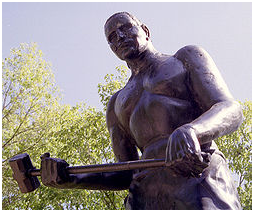 Of course, this isn’t a new trend. It’s a phenomenon as old as John Henry vs. the steam-powered hammer.

But what makes it important now is the money involved. Although businesses aren’t hiring humans, they’re pouring billions into new technologies.

Spending on software and machines hit an all-time high in 2011 – making the money invested in these technologies the second-biggest contributor to U.S. GDP.

This rise in tech spending has contributed to some of the biggest growth stories of the past decade. Companies like Intuitive Surgical (NASDAQ:ISRG), a manufacturer of robotic surgical systems that skyrocketed from a small $46 million company to a firm worth more than $17 billion.

And late last year, Lincoln Electric Holdings (NASDAQ:LECO), a manufacturer of robotic welding gear, saw a 71% increase in profits in one quarter!

Of course, any time something that was previously done by humans is mechanized, there’s backlash – especially in tough times like right now.

But before you join the Luddites and start smashing iPads, consider the investment opportunity. What was bad for the stevedores of the 19th century was great for railroad investors.

And for another example: at the turn of century, it used to take 40 hours of planting and harvesting to produce 100 bushels of corn. Now, thanks to mechanized combines, it takes just three hours and it’s all controlled by one farmer.

If there’s any dominant trend in human progress, it’s our ability to streamline production through technology. That trend isn’t likely to reverse.

As for which companies to invest in to take advantage of this trend, I suggest taking a look at a recent research report my colleague Jason Cimpl wrote on technology stocks. You can click here to get access to this free report.